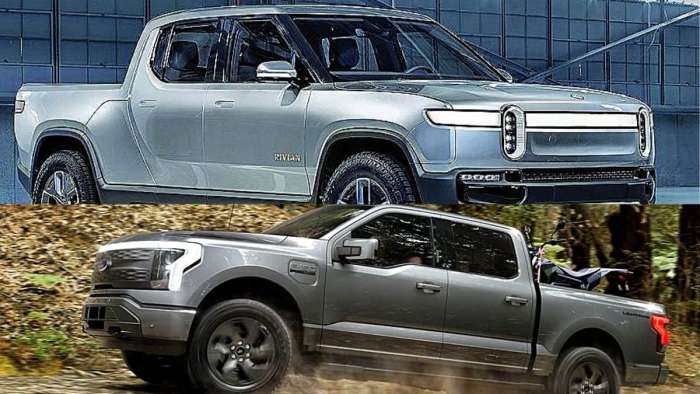 Rivian R1T vs F-150 Lightning, The Next Big Truck Rivalry

The electric pickup segment promises to be the next potential gold mine for automakers. The combination of zero-emissions performance and pickup functionality is a perfect blend of both worlds. The 2022 Ford F-150 Lightning promises to bring an electrified truck to the masses, but with Rivian’s recent announcement that it built its first “sellable” version of its R1T pickup.
Advertisement

We wanted to find out how a potential battle between the two would play out, so we crunched the numbers and looked over some of the cool technology that these trucks have to offer to find out which one would have the upper hand.

Rivian Brings Sci-Fi Looks, But The Lightning Appeals To The Working Man

The first thing that many buyers will immediately notice is that the Lightning and the R1T take very different approaches to exterior design. While the R1T is not as radically styled as the Tesla Cybertruck (which was recently delayed into 2023) the truck still has a distinct flair, with the front fascia adopting a clean look with two headlights that are unified by a distinct lightbar that goes from one end of the grille free nose to the other. Here you can see Torque News' coverage of F-150 Lightning's specs compared to Cybertruck's specs. 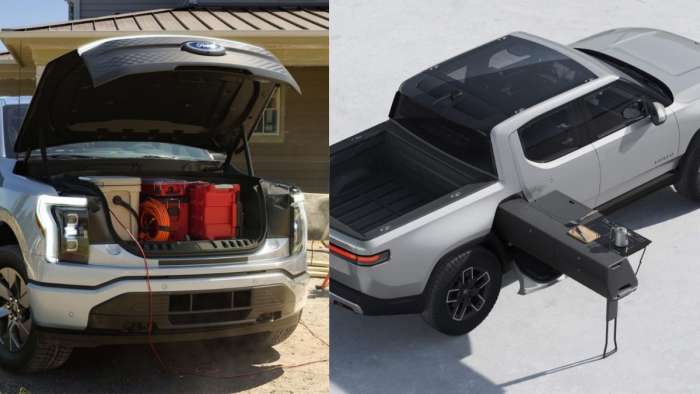 The side profile has a crisp yet simplistic look that allows the eye to gently flow towards the rear of the truck and it even comes with an incorporated storage cubby that’s accessible from either side of the truck. Speaking of the rear, the R1T makes things pop back there with a large lightbar and the Rivian name in large chrome letters.

Unlike the Rivian, the F-150 Lightning takes a more conventional approach to luring in EV buyers. While the front fascia is the most prominent difference between it and the gasoline powered F-150, the core shape of the truck retains a strong family link that should please buyers that want to take the plunge but don’t want to enter into a completely unfamiliar experience. The side profile is typical F-150, and it leads to the back of the truck, where a small tailgate mounted lightbar, tweaked taillights, and a baked in spoiler serve as the only clues to the Lightning’s unique mission in life. The Lightning also gets model exclusive alloy wheels which were crafted to help improve the truck’s aerodynamics slightly.

Slip inside either the R1T or the F-150 Lightning and you’ll see that both trucks take roughly the same approach to pleasing customers. The R1T is all about maximizing space while also incorporating plenty of state-of-the-art technology into its crew cab layout. That includes a large infotainment screen as well as a fully digital instrument cluster. Rivian designers also made good use of the materials on hand and that includes high quality animal free leather substitute, as well as splashes of wood trim.

The F-150 Lighting also appeals to luxury seekers, but as is the case with the exterior, the Lightning’s interior plays heavily into its F-150 heritage and familiarity is the prominent theme here. The gear lever for example still folds away and that allows you to transform the center console into a flat work station while the fully digital instrument cluster allows the Lightning to be on par with rivals. The design itself does not take too many risks, and other than some minor trim and equipment differences, you wouldn’t suspect right away that you entered into an all-electric F-150. 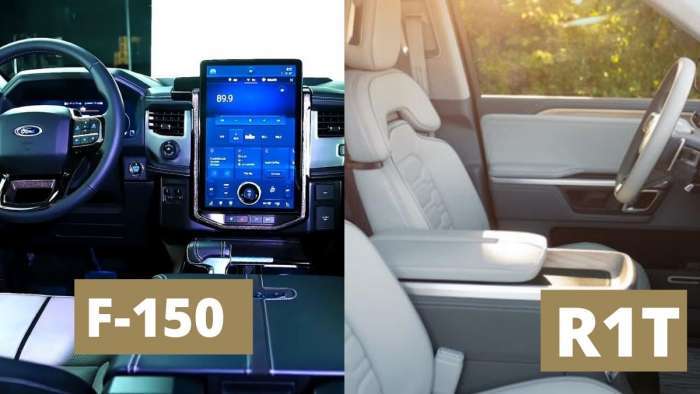 Our favorite feature though is the 15-inch touchscreen infotainment system screen that first appeared in the Mach-E. It has obvious inspiration from Tesla but the screen delivers crisp color and it meshes well with the rest of the Lightning’s interior too.

A key reason why the electric pickup segment promises to be a very profitable venture for automakers is that an all-electric powertrain promises higher levels of performance than what you can possibly get from an ICE powered offering especially in regards to low-end torque. While a large arms race will eventually form once more entries arrive in the segment, the Ford and the Rivian do provide an early glimpse into what such a race will entail, and that means potent performance for buyers.

The R1T is arguably the most muscular here, with the truck being powered by four-electric motors that are mounted in each wheel. Rivian reps claim that the combination produces up to 800 hp and allows the truck to blitz its way to 60 mph in 3.0 seconds while still giving it the ability to tow over 11,000 lbs. We’ll still have to wait until Rivian allows real-world drives, but we hope that the quad-electric motors can live up to the hype especially since they outshine the Hellcat powered Ram TRX by over 100 hp.

In comparison, the Lightning is powered by two electric motors but that doesn’t mean the Lightning is a slouch in this regard, with the company splitting performance into two distinct tiers. Go for the Standard model and you’ll get a setup that can produce 426 hp while the higher tier Extended model produces 563 hp.

Both trucks promise to deliver 300 miles of driving range per charge, but the R1T stands out by offering the novel “Tank Turn” feature which uses the electric motors in each wheel to allow the truck to spin and turn on its axis (similar to how a tank or other tracked vehicle moves from left to right.

As mentioned, an arms race is forming in the electric pickup segment, and it will become a very crowded place especially with the GMC Hummer EV pickup slated to begin production in fall of 2021. That model will eventually form an all-electric sub-brand at GMC but the brand will not have all the pieces in place until 2024 which will give Ford and Rivian time to fine tune and potentially expand their respective pickup lineups.