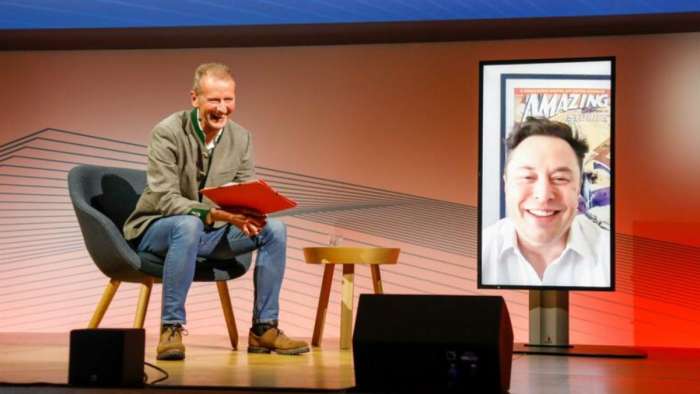 Herbert Diess, CEO of Volkswagen, recently invited Elon Musk to a 3 day company meeting to talk with VW management about the transition to sustainable energy. It takes humility for a CEO to invite their competition to a meeting and even take advice from him. Let's see what this is all about.
Advertisement

According to Handelsblatt sources, at a recent 3 day summit meeting this past Thursday, Volkswagen, and its top 200 executives and managers met to discuss moving forward with the electrification of their vehicle fleet and to try and be more competitive with Tesla.

Elon Musk explained what is behind Tesla's high level of productivity and dispelled any concerns about their e-mobility. This is an unprecedented move by Herbert Diess and Elon Musk, with Elon Musk showing that he is a friend and not an enemy.

Elon Musk also explained that Volkswagen is an icon and that he drove various models of VW as well as a Porsche 911 for a long time. He explained that Tesla is so much faster then the other automakers because of the leadership style. Elon Musk is an engineer first and foremost. He explained that he is fascinated by supply chains, logistics, and production processes.

The VW Group will master the change, Elon said, and sees VW as his biggest challenger to Tesla. He believes that Tesla still needs to become even faster and more productive than other car companies.

Additional News From Reuters About the Summit

According to Reuters, the reason why Tesla is more nimble than its rivals is that Musk's management style is that of an engineer who is interested in all areas of production, and that Elon Musk was brought in as a surprise guest to help VW make faster decisions with less bureaucracy.

This will be the biggest transformation in VW's history. Herbert Diess is happy to hear that even from their strongest competitor, that VW has a good chance to succeed if they drive the transformation to electric vehicles with full power.

One example of Tesla's nimbleness and prowess is that it took Tesla only two to three weeks to rewrite software to allow for a switch from one type of microchip, which went out of stock, to another. Diess also said in his Saturday tweet, that VW, which has emerged as the main contender to Tesla for global electric vehicle supremacy, would continue its dialogue with Tesla.

Diess has warned last month that the planned opening of Tesla's car factory (Giga Berlin) at Gruenheide near Berlin, which is the company's first in Europe, will force local industry to step up its game against the fast-growing U.S. electric vehicle maker. Tesla is awaiting final building approval for the $6.8 billion German site.

VW plans to build six large battery factories in Europe by 2030 as part of an all-in bet on electric mobility. There is no guarantee in this new world of electrification and VW will need to be nimble and make fast changes in order to be competitive in the electric vehicle market. Elon Musk considers VW their strongest competitor.

My Thoughts on the VW Meeting with Elon Musk

It makes a lot of sense for VW and Tesla to work together as both will benefit from sharing with each other. The overall vehicle market is about 1 billion vehicles and neither company will come close to that even with all their factories at volume production.

VW gains from partnering with Tesla because VW will learn how to be more nimble and get rid of red tape and bureaucracy. With VW being able to move faster, it will give them a greater chance of staying in business with the move from gas powered vehicles to electric vehicles.

In the end, if Tesla and VW both succeed, it is good for the earth and the environment. In fact, it is good for many companies to succeed to get humanity to sustainable energy as fast as possible. Let's see how VW does in the future and if they are able to implement what CEO Elon Musk shared with them.

With a new mindset & a revolution in our headquarter Wolfsburg we can succeed the new competition.Good meeting with 200 top managers in Alpbach. Big responsibility at a crucial point for our company. Thx for joining @ErinMeyerINSEAD & @elonmusk,we will visit you soon in Grünheide pic.twitter.com/dwYyXZnBT8

What do you think of Elon Musk's conversation with VW and their top executives at the recent summit meeting? Is it a good thing for VW and Tesla to work together?

LG's New EV Battery Plant Is a Welcome News for Tesla
Tesla Giga Berlin's New Hurdle: It's Not Only the Gov't, but Now Tesla Itself
END_OF_DOCUMENT_TOKEN_TO_BE_REPLACED