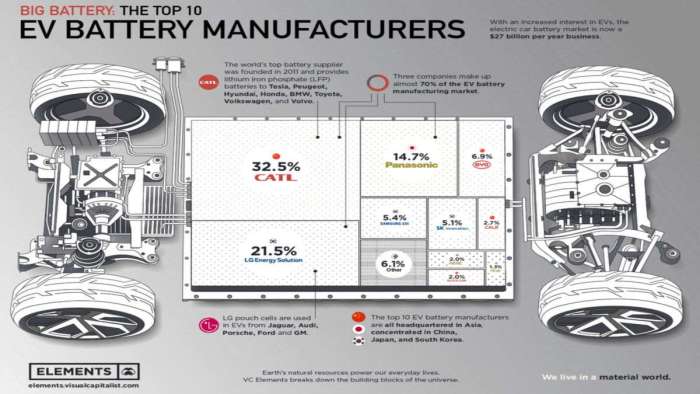 Elon Musk - Batteries Are the Most Important Resource for Electric Cars

Elon Musk just stated on Twitter that batteries are just as important for future transportation as oil is for current transport. This is a profound statement and what must be realized is that the battery is the most expensive component to an electric car. And that cost is going to decline over time as the technology improves.
Advertisement

In an electric future, batteries are as essential to transport as oil is today

Elon Musk stated that batteries are the most important component for an electric vehicle. Just as important as oil is for gas cars, in fact. With this statement, let's look at the top battery manufacturers, where they are located, and what the future of batteries for electric cars might be.

The top battery manufacturers in the world are:

All top 10 battery manufacturers are headquartered in Asia concentrated in China pic.twitter.com/QO7SP0xVAe

I wonder where Tesla ranks in this as we know Tesla is making many of their own batteries in addition to purchasing them from suppliers? Perhaps Tesla is in the "Other" category mentioned.

What's most interesting about the top battery suppliers in the world is that the top 10 are concentrated in China/Asia. This tells me that the U.S. is falling asleep when it comes to battery production and only Tesla in the U.S. is really following the flow of change.

Can the U.S. catch up in battery suppliers and manufacturers? Should U.S. companies even try to produce their own batteries if manufacturers in China can do it cheaply? I think the answer is yes. Here's why:

The reason for this is very simple. The end of the ICE (internal combustion engine) is coming. We are at the beginning of an exponential growth curve of adoption toward electric vehicles and renewable energy. Just look at this chart from JPR007 forecasting Tesla electric vehicle sales:

On their current trajectory we might expect Tesla to hit that in 2024~25 pic.twitter.com/QtjftxlF3L

Tesla may single-handedly keep the U.S. ahead technologically with its advancements in batteries and energy. Without Tesla, I worry that the U.S. would adopt a very slow rate of adoption to electric vehicles and far very behind the rest of the world, with most major auto-makers going out of business.

With the cost of batteries continuing to go down and down, Tesla will eventually be able to produce its Model 2. Other cheaper versions of electric vehicles will come toward the end of the decade until it is blatantly obvious how much cheaper and effective electric vehicles are than their gas counterparts.

What do you think of Elon Musk talking about batteries and they being the most important thing for an electric vehicle? Will we see Tesla or other U.S. manufacturers of batteries?