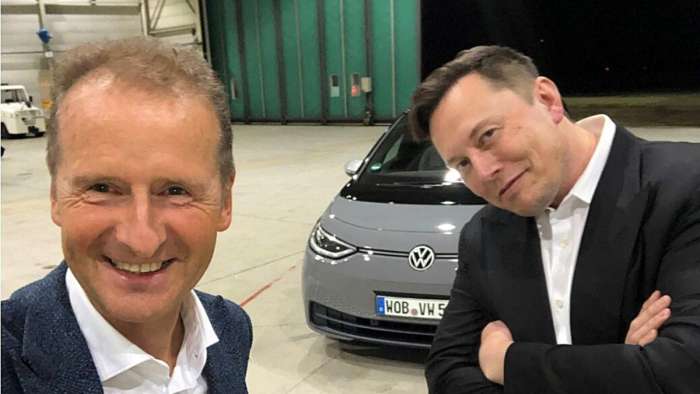 The current Chairman of the Board Herbert Diess, joined Volkswagen in 2015, but according to a report from German NTV, VW was not the only one trying to reach the BMW manager. Even Elon Musk offered Diess the chief position at Tesla.
Advertisement

No other German auto boss is pushing the restructuring of his company in the direction of electromobility as consistently as Herbert Diess. The VW boss also makes no secret of the fact that the electric pioneer Tesla, who has long been ridiculed by many other German corporate leaders, is a role model in many respects. Tesla boss Elon Musk has also expressed his respect for Diess' work at Volkswagen on several occasions. As "Torque News" has reported before, the relationship between the two is even closer than previously known. As a result, Musk even wanted to bring Diess to Tesla as a boss, reports NTV.

In 2014 it became known that Diess - then head of development at BMW - would switch to VW. In 2015 he took up the post there as head of the core brand and member of the board of directors of the entire group. In 2018 he became the CEO of VW. But VW was not the only company that advertised to Diess. According to the German-language NTV, which refers to the "Business Insider," Diess had a contract as CEO of Tesla that was ready to be signed.

As the report also says, Diess and Musk already knew and appreciated each other in 2014 and had met in person several times. What exactly moved Diess to Wolfsburg and not to go to Tesla in the USA is not known. However, at the time, Tesla was an aspiring, but loss-making company that did not yet sell 20,000 cars a year. At VW there were 10 million cars at the time. Before the quake of the diesel scandal, the Wolfsburg-based company vied with Toyota for world market leadership.

Despite his decision for VW, Diess was apparently convinced of Tesla and Musk's future success. While Tesla's German partner Daimler at that time sold his share package, Diess is said to have personally invested in Tesla. Another leading figure at Volkswagen was also convinced of the US startup at the time: Ferdinand Piëch, patriarch of the Porsche Piëch clan and then chairman of the supervisory board of VW. After a test drive with a Tesla, he recommended to the management in Wolfsburg: "Buy the company for me!" The anecdote rumored by "Manager Magazin" at the time was officially commented on by VW just as little as the current "Business Insider" report.

The story was different, however. Telsa rose to become the admired electric car market leader, while Diess became a "Tesla hunter" - albeit a respectful one - at the head of the VW colossus. However, he could soon get rid of this title. If everything goes more or less according to plan for VW, the German car manufacturer will replace Tesla as the world's largest manufacturer of electric cars in the coming year thanks to the electric offensive.