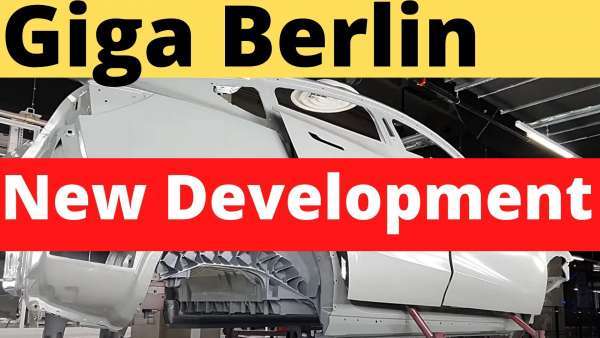 Environmental groups are calling for the Tesla documents to be re-displayed and for a new round of talks to approve the Tesla factory. 800 objections were filed during the online discussion on the Tesla factory as of yesterday. However, environmentalists are now accusing the responsible state office of serious procedural errors. That could push back the schedule for the start of production.

After the end of the online discussion of objections to the construction of the Tesla factory in Grünheide near Berlin, several environmental associations have called for a repetition. They justified this on Friday, among other things, with a "serious" procedural error by the State Office for the Environment (LfU), which is responsible for the issue of the factory's approval: The authority did not meet the deadline for announcing the Internet consultation, the lawyer said of the Naturschutzbund (Nabu) and the Brandenburg Green League, Thorsten Deppner, on Friday.

Online discussion of over 800 objections to the factory began on September 24 and ended on Thursday. The authorities are now examining whether there is still a need for examination. It is therefore also unclear when the final approval of the car factory will be decided. Tesla also wants to manufacture batteries there. Critics fear that drinking water could become scarce as a result and that it would have negative consequences for plants and animals. Tesla has rejected the criticism.

Giga Berlin deadlines are said to have been missed.

According to the lawyer, the online consultation should have been published in the official gazette at least a week before the start of the law. But that only happened two days before, on September 22nd, said Deppner. The deadline was not met. "If it should not be the case in Brandenburg that there is a special treatment for Tesla in an illegal manner, then the LfU and the state government must stand by their words," said the lawyer from Nabu and Green League.

According to the Ministry of the Environment, the reaction of the environmental associations was received on Thursday evening and is before the approval authority. The State Environment Agency is doing a legal examination.

The associations are also calling for a new interpretation of Tesla's building application. Deppner accused the country that the latest version of the application was illegal because the US electric car maker was still missing statements. In addition, Tesla's application has been significantly changed, especially in the area of incident analysis, said the managing director of the Brandenburg Green League, Michael Ganschow. "Especially the information on the use of substances is still blacked out or incomplete."

According to the environmental associations, three substances were added to the calculations of the quantities of substances - sodium hypochlorite and hydrofluoric acid as chemicals and airbags as hazardous waste. Not all changes were clearly marked for the critics. "The public was unable to comment on this part of the application documents that was relevant to health and the environment," said the associations' statement. "If there shouldn't be a Lex-Tesla here (...), then we expect that significant improvements will be made before approval can be given," said Nabu managing director Christiane Schröder.

The environmental associations stated that after approval, the objection period is one month. If an objection is granted, an action can be taken. The associations have not yet specified the further procedure.

The timeline for the decision on Tesla's first electric car factory in Europe is still open. The three-week discussion of over 800 objections to the factory ended on Thursday - from Friday, the authorities then examined whether there were new findings and tests, said the spokeswoman for the Ministry of the Environment, Frauke Zelt, on Thursday. How much time this will take is still open. According to the ministry, there have been around 29,400 hits on the site since September 27.

Tesla boss Elon Musk said at an open house last Saturday in Grünheide that he wanted to start producing electric cars there by December at the latest. Critics fear problems with drinking water and with the habitat of plants and animals. Tesla had rejected the criticism.

The new online discussion had become necessary because Tesla had updated its building application, among other things, because of the planned battery factory on the site of the so-called Gigafactory. Because the final approval for the factory is not yet available, Tesla has so far been building it on the basis of preliminary approvals.

Also, the water supply for the region has been clarified for the first expansion stage of the Tesla factory in Grünheide. But if production grows, drinking water could become scarce. The Brandenburg Ministry of the Environment sees no need for action so far.

In the opinion of the responsible water association, the drinking water supply in the region is not yet secured in the case of a further expansion of the factory of US electric car manufacturer Tesla in Grünheide near Berlin. "How you want to meet the needs is completely open," said the head of the Strausberg-Erkner (WSE) water association, André Bähler. He also referred to the settlement of other companies such as suppliers and new apartments for employees. Nobody knows where the water should come from for the additional needs. A contract has already been signed for the water supply for the first stage of expansion of the factory in Grünheide.

The Brandenburg Ministry of the Environment sees no need for action so far. "We have not yet received any plans or applications for further expansion stages," said spokeswoman Frauke Zelt. She also referred to a working group on water perspectives for the eastern Berlin area. The ministry is also having other water resources explored, for example in the Hangelsberg area.
Tesla boss Elon Musk said at an open house in Grünheide on October 9th that he wanted to start producing electric cars there by December at the latest. However, the schedule is still open because the final approval is missing. After an online discussion of objections to the factory, the responsible authorities in Brandenburg are investigating whether there is a need for further testing. Critics fear problems with drinking water and negative consequences for the environment.

Tesla had rejected the criticism. The company also wants to mass-produce its own batteries there. Tesla is currently assuming water consumption of up to 1.4 million cubic meters per year for the car plant at full capacity of 500,000 vehicles. The company had reduced the value by 30 percent through water-saving measures. Tesla estimates 2.2 cubic meters of water per vehicle, including the planned battery production, and emphasizes that this is below the industry average of more than 3 cubic meters. Earlier plans included a theoretical maximum of 3.6 million cubic meters of water per year for the entire area that Tesla could expand.

Part of the factory site is located in the drinking water protection area. The head of the WSE association warned for the first time last year that there was not enough drinking water in the event that the factory would be expanded further. The red-black-green Brandenburg state government pointed out at the time that talks were ongoing. According to Bähler, no consultations are currently taking place. "The discussion we are having with the country is completely inconclusive," he criticized. The Brandenburg Ministry of the Environment stated against it that the talks continued.

LG's New EV Battery Plant Is a Welcome News for Tesla
Tesla Giga Berlin's New Hurdle: It's Not Only the Gov't, but Now Tesla Itself
END_OF_DOCUMENT_TOKEN_TO_BE_REPLACED