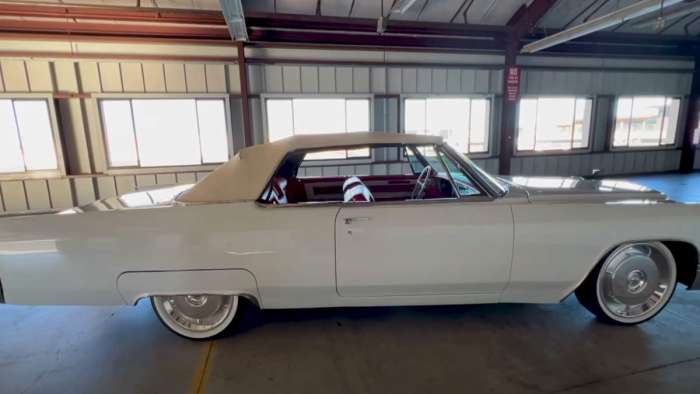 Tesla's Version of the Cadillac Would Be This

If Tesla were to create a Cadillac vehicle, this would be it. We have a video of a Cadillac, converted to an electric vehicle (EV). Let's take a look!
Advertisement

Tesla's Version of the Cadillac Would Be This

We have a video from Rich Rebuilds who talks about the Cadillac vehicle and if Tesla were to make one, this is what it would be.

Legacy EV, started in 2019, is a company started by Rob Ward to take old vehicles that use gas and convert them to become electric vehicles. In this case, he bought a cadillac vehicle that was pretty old and converted it to be an EV (electric vehicle).

The Cadillac has a very large front that opens and there is a one of two battery boxes. The other is where the gas tank used to be. Inside the battery boxes are a total of 55 kWh of batteries.

Restoration happened on the inside of the vehicle as well. Everything was redone - though the seats are still original. There isn't heated seats, however. There is a knob on the drivers side dashboard that is used to keep the vehicle at a normal speed while driving.

They took the Cadillac out for a drive to see how it would perform. It has the ability to raise up a few inches from where it sits. This was likely a custom job on the Cadillac to add some flare to it.

There is a decent amount of leg room in the front. The car itself is about 224 inches long (about 18, 8 inches). It drives pretty quietly. It was just under 7,000 pounds. The original car was about 5,000 pounds.

There were other vehicles that were converted to EVs, including a Porsche and a reVolt truck. Legacy EV will convert old cars to EVs, with what looks like a desire to preserve the legacy and classic look and feel of the car.

This is a good option for those who don't have the money to buy an EV outright and want to add some longevity to their vehicle if the engine is getting close to dying. Since the world is transitioning to EVs and will likely be there sometime around 2030 to 2035, it will be important to have an electric vehicle.

What do you think about Legacy EV? Are they a good thing for the transition to EVs?