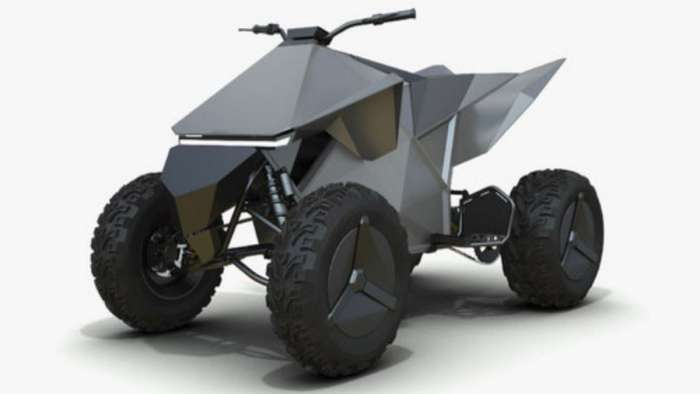 More details can be found here.

Because Tesla has filed an additional trademark for apparel for the Cyberquad, we can assume that the launch of the ATV vehicle is nearing. What would be the purpose of the apparel if not to be a way to market and create interest in the ATV itself?

The Cyberquad first appeared in late 2019 as a CyberTruck sidekick. The Cyberquad looks like a futuristic ATV with a very sleek set of flat surfaces, edges, and nice thick wheels. It was shown to drive up the CyberTruck pickup and charge right on it.

We don't know what the details are of the Cyberquad such as what kind of battery it will have, range, top speed, etc... but hopefully all of that changes soon.

What Else Is Going On?

Details shared by Tesla have been sparse for the Cyberquad. Tesla applied for the trademark for the ATV in September of 2019 and did so under these 6 different classes:

Does Tesla plan to have the Cyberquad be an all-purpose utility vehicle with mobile properties that can do a variety of things including storing food? Time will tell...

As for the trademark wording for the Cyberquad apparel, it is this: It is "intended to cover the categories of clothing, namely t-shirts, shirts, jackets; hats; infant wear; footwear; pants."

I'm predicting that we will see the Cyberquad unveiled at Tesla's next big event, possibly the 2021 shareholder meeting.

What do you think of the trademark for Cyberquad apparel? Is this to create interest for the Cyberquad, which will be released soon? Or is there some other reason?

Timothy Boyer wrote on September 28, 2021 - 8:15pm Permalink
Hmmm, could just be a preemptive action to prevent problems with someone else beating them to the rights of Cyberquad. Kind of like buying up domain names ahed of time just in case. But, it would be cool if the Cyberquad becomes a reality.
DeanMcManis wrote on October 1, 2021 - 1:51pm Permalink
It is cool, and I look forward to seeing one in real life. But Tesla really needs to move forward with their Cybertruck production ASAP!
Timothy Boyer wrote on October 1, 2021 - 6:34pm Permalink
ASAP is correct. I don't see how their fanbase can stay so loyal at this point; but, I hope it does become a reality too.