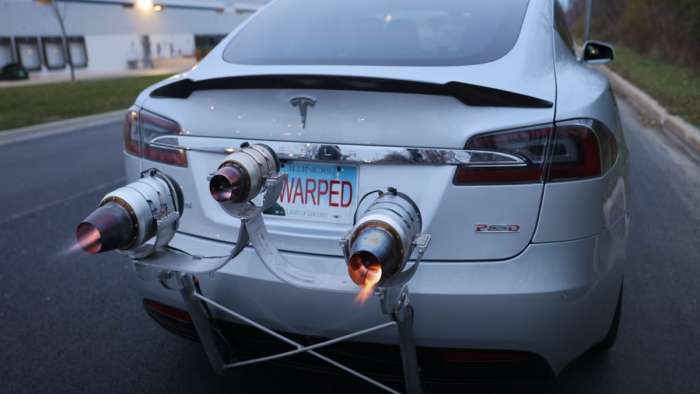 Tesla Owner Puts Jet Engines on the Back and Times It

A Tesla Model S With a Jet Engine

We just watched a video from the YouTube channel, Warped Perception, where the owner of a Tesla Model S P85D, mounted 3 jet engines on the back of his Tesla. He wanted to see what impact having those engines would have on the speed of the Tesla against what driving it just under its own power would do.

Next, he had to build the rear controls, which involved a lot of wires. and placing the proper electrical outlets for the wires to run through and plug into. In the end, individual circuit boards were set up for each engine to connect to.

Then he had to attach the jet engines. You could see him first do this with his design software on his computer. It was a very mathematical and precise calculation.

He then installed the fuel tank. The jet engines need to get their fuel from somewhere and won't be able to use the electrical power of the car. Once the jet engines were done, he flipped the on switch and the engines came to life. They made a noise that sounded just like an airplane getting ready to take off.

Timing the Tesla With and Without the Jet Engine

He took his Tesla Model S and began driving on the freeway with the engines on. You could see flames shooting out of the engines and the loud sound like an airplane while he was driving. I'm sure people were looking at his car in curiosity or fear.

He went to go fill up his engine with K-1 Kerosene fuel and spilled and ended up having to get a funnel. He got some turbine oil to mix with the fuel as well. After filling up his tank with about 7 large cups of fuel, he was all filled up.

Now the tests begin. Unfortunately, it was very rainy and the road was wet where he was doing his tests. He had 100 lbs. of fuel and about 50% battery. Not the best and most ideal conditions.

His first run from 0 to 60 mph was 4.38 seconds. There was definitely some tires spinning from the wet ground and skidding along the way to get to 60 mph.

Then he went back to the start and turned on all 3 jet engines. You could see the flame coming out of each engine. They were ready to go. He was able to do 0 to 60 mph in 3.32 seconds. He did a second run and got 3.4 seconds. There were screeching tires and skid marks from the launch of the car. The tires were likely spinning for the first couple hundred feet.

Under the circumstances, he says this was the worst 0 to 60 mph times he has ever had with his car. He wants to revisit this when it gets warm outside and the roads aren't wet.

If we take the 3.32 seconds and compare it to the time of 4.38 seconds, that's roughly a 25% faster time with the jet engines. I think when it's warmer and the road is dry, we'll see an even bigger percentage gain.

There has been mention of Tesla's next generation Roadster and that it may have an option for a SpaceX rocket as an add-on and that it could allow for a 0 to 60 mph time of around 1.2 seconds.

I'm curious to see how the rocket booster compares to the Tesla with jet engines. There is some interesting math when it comes to the Roadster with a SpaceX rocket booster.

tangible wrote on December 12, 2021 - 1:12am Permalink
so he did this on public roads. genius. thanks for promoting reckless behavior. just because you CAN do it, doesn't mean you SHOULD.
My dad says tha... wrote on December 14, 2021 - 2:33am Permalink
Just because you can write a stupid comment disparaging someone's innovation and creativity doesn't mean you should. Crawl back to your safe space and continue hiding in your bubble of ignorance, censorship, and perceived safety.
tangible wrote on December 14, 2021 - 10:54am Permalink
Thank you for confirming my original assessment of your special status. Not only did you endanger the Public by running your tests on public roads, but you did it on wet pavement. You also endangered yourself. Ever think about the thrust vector if one side engine failed? You're OFF the road fast. Your development and fabrication skills are to be commended. Really well done. However, in this case you just hastened your entry to the DARWIN AWARDS selection committee. Please use those skills more responsibly in the future.