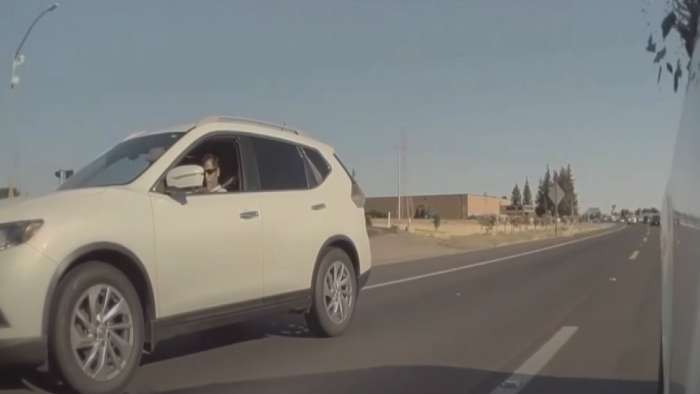 There was a recent upload of a video of a Tesla Model Y video camera capturing the actions of a shooter on the freeway who pulled out a gun of some kind and shot out the window of the Tesla Model Y. Everything was recorded and police were notified.
Advertisement

What Happened In the Shooting of the Tesla Model Y?

Fortunately, according to the report of the shooting, police arrested the man caught shooting out the window of the Tesla Model Y. The shooting took place on June 29 on a freeway in South Sacramento.

The shooting took place around 8 AM and a man driving a Nissan Rogue was seen driving next to the Tesla Model Y when he pulled out some kind of gun and fired, shattering the window of the Tesla, and then immediately accelerated past the Tesla. Fortunately, the Tesla cameras caught the act and the license plate of the man's car.

Police were later able to find the man and search his car and find various weapons and round golf ball to marble sized projectiles used for shooting.

In a normal situation without video footage, it would have been a lot harder to track down the shooter in this case. Fortunately, Tesla is not just a car company, but a technology company, and had video footage rolling to catch the entire act on camera.

Because of Tesla's technology, driving incidents, whether it is shooting, or a crash of some kind will all be on camera, making it easier to tell who is at fault or causing a crime.

In addition to that, Tesla's Full Self-Driving software will make roads safer for everyone once level 5 autonomy has been reached.

What do you think about this incident? Did the Tesla accurately capture everything that happened? Are there other scenarios I didn't mention where Tesla technology will come in handy?

DeanMcManis wrote on July 13, 2021 - 1:01pm Permalink
Yeah, that almost counts as a hand held cannon, rather then just a gun!