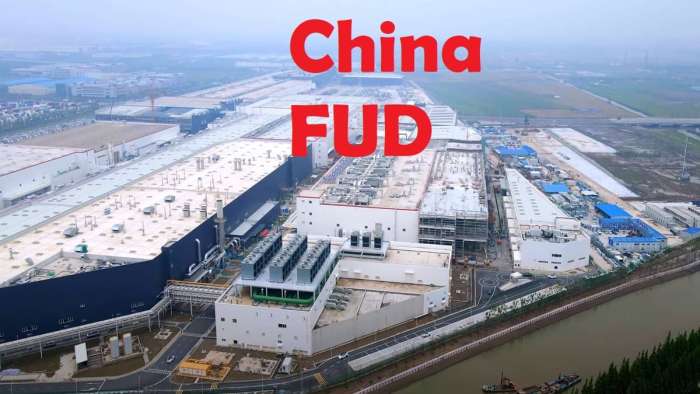 Tesla FUD from China: What's Real and What's Not

Recently, there has been a lot of bad press against Tesla concerning China. First there was a customer complaining of bad brakes, then a TikTokUser saying their brakes failed. Then there are reports of China sales dropping dramatically. What's true and what's not? We have a lot to cover here!
Advertisement

FUD means Fear, Uncertainty, and Doubt. It's a term used to scare people regarding something and is often used in investments to scare people into selling their stock or security they own, which drives the price down, which creates a buying opportunity for those who caused the FUD. This should be illegal by the S.E.C. (Securities and Exchange Commission), but typically news stories with FUD aren't reigned in by the S.E.C.

Let's briefly go over the FUD being spread:

This event looks like it did indeed happen. However, when Tesla asked the woman if they could inspect her car, she declined and further logs from Tesla showed no issue with the brakes. Tesla issued an apology for how it handled the situation and I believe there's nothing to be worried about here.

More information can be seen here from TeslaDaily.

A TikTok user said brakes were failing on their Tesla

There was a video made by a TikTok user saying their brake's failed for their Tesla car. It turns out, this was all a stunt and not real and that the guy in the middle of the video has owned his Tesla Model S for 3 years and that the video was for entertainment purposes only.

Tesla China Legal team went after a Tik Tok account, which posted a video showing Model X brake failure. Now they apologize for causing the negative effect to Tesla. The guy in the middle has owned his X for 3 yrs and never had any problems, saying the skit was 4 entertainment only. https://t.co/3c8ErewuBx pic.twitter.com/tZ8wi6EmPa

There has been reports of customer dissatisfaction

There have been reports of customer dissatisfaction coming out of China, but the user Ray4Tesla on Twitter has shown numerous apologies showing that there was spreading of rumors without evidence. In my opinion, there could be some negative things happening and an impact due to that, but overall, nothing to worry about here either.

An auto social media outlet in China steps out, publicly apologizing to @Teslacn for spreading "brake failure" rumors without evidence. He urges other outlets to delete the false info & promises to stop spreading rumors in the future. Very interesting development. #FUD, #TSLAQ pic.twitter.com/bLmmPzcT4S

There are reports of greatly decreased orders

This one is the most recent FUD being spread and let's go over the different aspects of it. It all started with the news on this website that Tesla was facing a crisis as China orders were dropping. Here is the Twitter message for it:

SCOOP: Tesla's crisis in China has deepened. Monthly net orders in China fell to about 9,800 vehicles in May, from more than 18,000 in April. (net orders = new orders minus cancellations) $TSLA https://t.co/D8IqSzpbom @theinformation

Anytime I hear that some data is coming from "internal data" without mentioning a specific source (like the Chinese government or Tesla itself, or something official), it immediately makes me question what is being said. When something is vague without details of a source, often times, a lie is following. But let's look at it more and not dismiss it quite yet.

There's quite a bit of Twitter threads going on regarding this subject, so let's now go to the Twitter user, Gary Black, and his response to this Twitter post. Gary said that the numbers provided weren't accurate according to Chinese domestic sales in the below Tweet. I really wish Gary would have linked to the Chinese domestic sales or at least said the information isn't available online.

Juro - Your orders data for March and April (21K and 18K respectively) isn’t even close to official domestic $TSLA sales published by the Chinese govt (35.5K and 11.6K, respectively). How do you know your data is authentic? If you’re certain it’s real, how do you reconcile?

We now have two sets of data and discrepancies and it's tough to really gauge what is right and what is wrong here. We'll likely have to wait until next week when the official delivery numbers come out for May for Tesla. Orders may have been impacted by negative Tesla news in China.

Either way, the news of a crisis in China seems sensationalized in order to cause FUD, and Gary's response doesn't site a URL link for us to see the numbers he came up with. That doesn't discount what Gary is saying, he's a very well known and respected Tesla investor, I just think we need a source linked in a URL without having to go Google ourselves and guess what link is right.

My hunch is that demand still remains strong and that Tesla has exported quite a bit of cars from China, so in fact, both Juro and Gary could be right.

With that, let's take a look at a few Tweets showing positive news out of China and exports of Tesla cars:

Here's a report of Tesla's being seen in Switzerland on a train. These are clearly exports because Giga Berlin is not online yet (though I think it's close):

The Twitter user, Ray4Tesla also shares that numbers in China have been picking up as well (though he didn't cite a source):

Disclaimer: the following numbers are what I just heard. Highly speculative until confirmed. If turned out to be wrong, don’t shoot the messenger

45k MIC Model 3/Y units produced in May, including 20k delivered & 25k exported. Prod capacity for export has been booked til July.

And lastly, we can see that 1,500 Tesla's were exported to Australia according to Ray4Tesla:

A Huge Batch of 1,500 Tesla Model 3 Arrives in Australia. https://t.co/Wy3disuRmt

As we can see, it's easy to spread both good and bad news. I think the key thing here is citing sources with actual links and showing actual videos and pictures for proof. When news is reported and statistics from official sources like Tesla or governments are used, it gives more credibility to the report.

Therefore, my conclusion is to believe, based on the reports and videos I see, that China is exporting quite a bit, that there has been a lot of negative news and orders may be impacted due to that, and that we'll have to wait and see next week what the official numbers are for May. I believe they will be positive for Tesla as there is no indication that the demand for electric vehicles is slowing – the reason being there is 1 billion cars on the road that are gas powered that will not be economical or environment friendly in the future.

What are your thoughts on the China FUD against Tesla? Are the negative order reports true? Is China doing well with sales for Tesla?