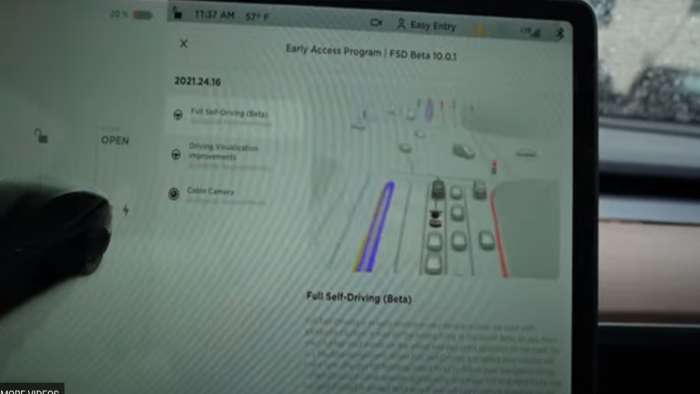 We have some test drives with Tesla FSD Beta version 10.0.1. Tesla released this version 1 week after version 10.0.1. Here's the experience HyperChange had, who is famous for his Monorail Test - a difficult edge case that full self-driving will need to solve to reach level 4 and level 5.
Advertisement

While driving with the new FSD version, HyperChange commented on how smooth the driving is. Autopilot is smooth, but now the FSD on city streets is getting smooth.

There was a clipped video of HyperChange's 5 monorail tests where someone was trying to make Tesla look bad. There was no mention that HyperChange took the video and he had to have the video taken down. HyperChange will be more careful on how he posts.

FSD was driving a little too close to the curb and HyperChange had to disengage - his first disengagement of the drive.

HyperChange talked about the reason for FSD. It's to stop letting humans drive, which causes so many accidents and injuries and deaths. With a safe AI driving cars around, this will reduce the problem of injuries, deaths, and accidents. That's the reason for FSD.

Seattle traffic is getting more dense and the economy is booming. I believe HyperChange said this to show that FSD is going to have dense traffic to deal with.

FSD went through a yellow light without any phantom breaking, just like a human would. Very impressive.

There was a car in both lanes, and FSD stayed behind it without trying to go around it. This was good.

The monorail test is testing the FSD software with two lanes going one direction that are separated by pillars in between them. There is space to change lanes between the pillars, but it's a challenging thing to do, even for a human.

With FSD 10.0.1, the car gets ready to turn right into the two lanes with the monorails in the right lane. The car very quickly weaved between the pillars, but HyperChange disengaged.

While driving manually, he was trying to get back into the right lane between the pillars and was struggling to do it. He mentioned that the FSD software was seeing the view much better than him. He gave it another try.

Elon Musk mentioned that there has been no accidents on FSD with 2,000 beta testers. That's very good and it's important that people pay attention at all times. The car is not yet autonomous.

While turning right for a second try, the vehicle waited for pedestrians that were all around. He engaged FSD while in the right lane with the monorails in the middle. It flawlessly weaved between the monorails into the left lane between them. Very impressive.

FSD was going to make a left turn and HyperChange disengaged. But he didn't need to. The car was seeing the left turn better than him it looked like.

With additional driving, HyperChange was going to a street that FSD previously messed up on. The car was gutsy with the yellow light and didn't force a stop. This is how many human drivers do it.

On the next street, a lane that should be a lane was covered with vehicles and construction cones. The car didn't try and go in that lane. HyperChange accidently disengaged in the construction. You could see the car making decisions in real time as it was driving at the end.

Overall, most things similar with the new version. Overall, version 10 is better overall and is an improvement over FSD version 9. I believe FSD will keep improving over time!