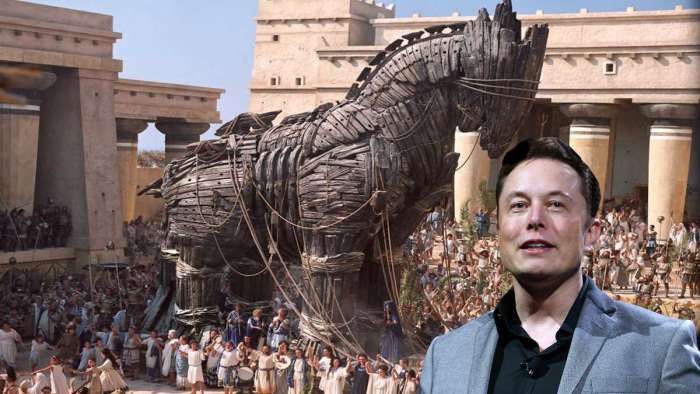 Tesla Can Use Trojan Horse to Take Advantage of Tax Credit

The most recent update on the U.S. Electric Vehicle tax credit bill is that it will only apply to electric vehicles costing $40,000 or less and for people with an income less than $100,000. Tesla won't qualify for this in most cases, but they can do something smart in order to qualify most of their vehicles for a tax credit.
Advertisement

The US Senate has voted to approve a new $40,000 threshold on the price of electric cars that would be eligible for a $7,500 federal tax credit.

Additionally, only buyers with an income of less than $100,000 would be able to apply for the tax credit.https://t.co/IIz6flL1V8

The Trojan Horse was used long ago in the battle of the Trojan War. The Greeks gave a "surrendering gift" of a giant wooden horse, which the Trojan's accepted and moved into their city. However, there were Greek soldiers inside the horse that once inside the city, that used to be secure from invaders, was now infiltrated at night and taken over.

Tesla can employ a strategy like this, in that they have superior technology and over the air updates. These over the air updates can allow Tesla to price versions of their vehicles below $40,000, with features that need to then be unlocked AFTER the purchase of the Tesla vehicle.

For example, Tesla could sell a Model Y - vehicle that only gets 100 miles of range, for $35,000. But, to get the additional 220 miles of range, you can pay $12,000 for an over the air update. The initial purchase price of the vehicle fell below the $40,000 tax credit limit, and one can then pay extra for the upgrade to the battery.

Tesla can probably do other clever things with over the air updates and after purchase options that I haven't even thought of as well.

The fact that there is even discussion about Tesla having to do this suggests that the current tax credit proposal is broken. Why put a limit on income? Why not put a limit of $80,000 on the price to allow for most electric vehicles to qualify without having to play a game to qualify for the tax credit?

A better version of the tax credit bill, which would truly accelerate the adoption of electric vehicles, would be to double the amount to $80,000, and either limit income to $250,000 or less, or remove the income limit altogether.

What do you think about the currently proposed tax credit bill? Is Tesla going to make a version of their vehicles that costs less than $40,000, but that can be upgraded? Will the Model 2 make all of this a mute point anyway?