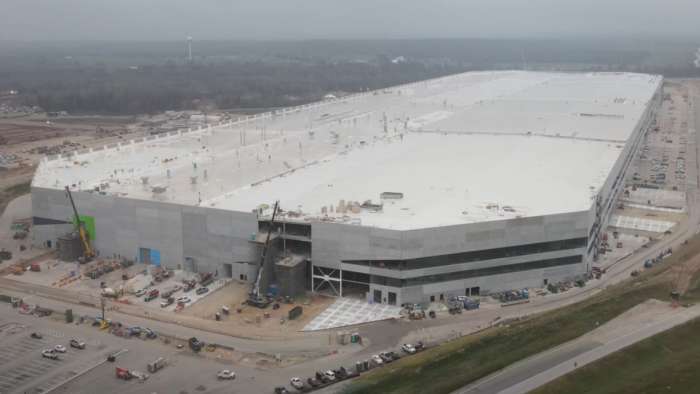 We have some amazing and stunning aerial footage of Giga Texas. We've been told that Giga Texas will also begin production next week. It's exciting times for Tesla!
Advertisement

The footage of Giga Texas is amazing. Keep in my, that this is a factory that is nearly a mile long and a quarter mile wide. There's going to be many millions of cars coming out of this factory a year eventually.

We can see a pretty much complete Giga Texas factory in the aerial footage from Joe Tegtmeyer. We also know that there is still work being done and that most likely, the inside is not as complete as the outside. This is from past photos and videos from Joe.

Joe states that production is set to start next week at Giga Texas. If this is true, it's very exciting!

We also know that Giga Texas is going to start with 4680 battery cells, whereas Giga Berlin, the sibling to Giga Texas over in Germany, will use the 2170 cells.

Giga Texas has cars already being crash tested and being looked at from other testing sites. This is most likely what the 6 performance Model Y vehicles seen leaving Giga Berlin were also doing. We might just see both these factories begin production at the same time.

The potential for Giga Texas is staggering. Tesla had the chance to build an entirely new giga factory from the ground up and get rid of the inefficiencies that were at the Fremont, CA factory. Giga Texas is enormous and I have no doubt that we'll start to see volumes reach many millions of vehicles in the coming years.

Giga Texas will also produce the Cybertruck, which will be Tesla's most advanced vehicle. I think once we start to see the Cybertruck and everything that comes with it, like solar panels, and what it can do, people are going to want it. I'm in line to get one, but I don't expect it for at least 3 more years.

In fact, I put together a timeline of when I think Tesla could reach 3 million Cybertrucks produced. This, along with a spreadsheet that estimates your place in line for your Cybertruck, can give you a rough idea of when you will get your Cybertruck if you were to place an order now, or placed an order in the past.

I'm excited for Giga Texas to begin production and to see how Tesla executes in 2022!

What do you think of these videos of Giga Texas? Will production start next week?