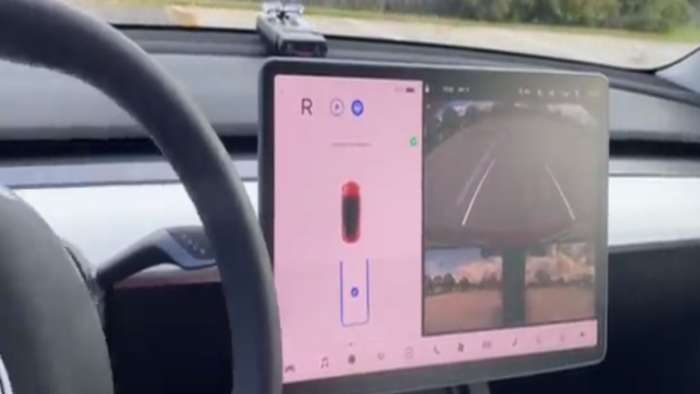 We have news that there is going to be a new auto park feature coming for the Tesla Model Y and Model 3. This will allow one to easily park, especially during periods of dense traffic. However, there are some very profound implications of a Tesla being able to auto park that I'll mention as well.
Advertisement

Tesla's latest auto park feature is said to use cameras as well as ultrasonic sensors, according to a long thread on Reddit. We can see the feature in action in the above video. Let's see what people have to say about it.

There was a comment from a Reddit user who thought it would be awesome if the auto park showed all available spots in view and allowed the driver to pick. The current visualization doesn't make it clear which spot the auto park is suggesting or going for.

Another user says it is a critical part of the advanced summon feature, to have the car go park itself. It will definitely come some day. This is a huge step closer to that promise.

I would add that the auto park feature is even more important than this. When robotaxis start to come into operation, a Tesla vehicle will need to know how to go park in a stall and wait - either for charging, or for the owner to come get the vehicle for their own use or to do maintenance on it. The car will need to be able to follow lines and park.

Another user stated that most auto park systems can only work between other cars with pure ultrasonic detection of open spaces. And that being able to just use lines and vision is a huge step forward and will really help with curbs.

Other Tesla owners talked about how they could never get their car using auto park to recognize a potential parking space and that the feature seems to have just disappeared about a year ago - meaning the parking icon never shows up to push no matter what they do.

Many users asked questions about this and other users said that the icon has always been there for them. Could it have something to do with having FSD purchased or enhanced auto pilot features?

Another user state: The old ultra-sonic version, required something next to it to line up the entry and stay even... so if you were around empty spots, it will not pop up with auto park... you have to want to park next to someone else. That has been my experience and what I found online and from testing this at work. The new vision only seems to work well based only on the lines now. I have the beta, used auto park on Friday and did use it before I had the beta too. It’s all about setting up the car correctly. The vision system will correct this.

Another user stated that they use it almost every day. But the trick is to continue a little further than feels normal when hunting for the parking space. It takes about 2 seconds then for the little gray parking icon to appear. Another user said it can find spaces for parallel parking at a reasonable speed. Other parking bays need a reduced speed.

Lastly, we saw another user say: I’m confident auto park will work well as soon as FSD is at least level 3 maybe 4 and is consumer ready. They can’t have it now because it would cannibalize FSD sales. But when they have a feature set to differentiate the two again, they’ll offer it. Because there’s a huge gap between $0 and $10k for driver assist add-ons right now. But they know the only sellable part of FSD right now is enhanced autopilot. A $100 subscription for it would be great too.

I think people would pay a couple thousand dollars for enhanced auto parking and not FSD.

My Thoughts on Tesla Auto Park

Since I don't own a Tesla (yet), I can't comment on the auto park icon being there or not for owners. What I can comment on is the usefulness of the feature.

The first is being able to park after an autonomous taxi ride. In this video from Warren Redlich, where he rode in a Waymo self-driving vehicle, the vehicle drove awkwardly and stopped and dropped them off in the middle of the street. This is no good and dangerous. If Tesla can drop you off in a parking lot and not on the side of the street, that's a huge difference in safety and user experience.

The second important feature of auto park is for a Tesla going to park and go to a charger/service stall. If a Tesla can go park at a charger stall by itself and a service agent or some automatic system can open up the Tesla to charge it, then a Tesla could drive around autonomously without any need for intervention for thousands of miles before an owner would have to go do something to it. Maybe the owner would need to clean it regularly every day depending on how people treat the car. But the cleaning could be done at a service center the car parks at as well.

The importance of being able to drive around to places and stop and charge, be cleaned, or have service done means a car could operate for an owner autonomously without the owner ever needing to see their car. This is going to be one of the most amazing things to invest in. Imagine having a car make money for you and never seeing it?

The third important feature of being able to auto park is that a Tesla can be conveniently delivered to you and wait for you to find it and get into it. I think in the future, that someone who buys a Tesla will never have to go to a service center to pick up the vehicle. They'll be able to just have the car drive to them and park in a safe place.

What do you think of Tesla and its auto park feature? Is this an important feature? What would you use auto park for?

DeanMcManis wrote on October 20, 2021 - 10:58am Permalink
Advanced self parking is a real breakthrough, especially if it is a free addition to Tesla's Autopilot suite of software features/apps currently on the Model 3/Y. I look forward to seeing how well this works in the real world where parking can be a nuisance and a chore.

LG's New EV Battery Plant Is a Welcome News for Tesla
Tesla Giga Berlin's New Hurdle: It's Not Only the Gov't, but Now Tesla Itself
END_OF_DOCUMENT_TOKEN_TO_BE_REPLACED