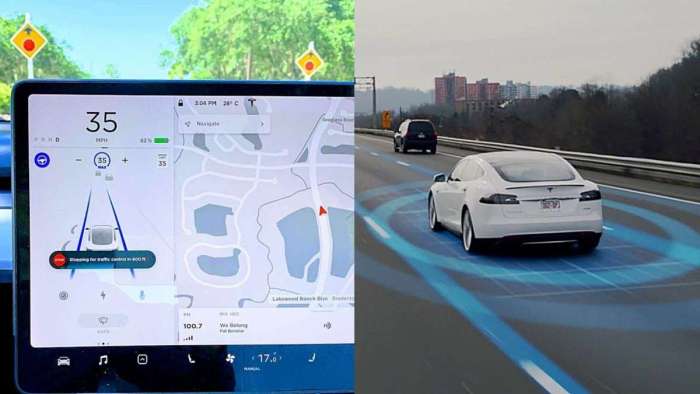 The idea of self-driving cars has always been terrifying, but the technology has come a long way. A recent incident in Texas sparks additional speculation.
Advertisement

Tesla’s driver-assist system has been touted as a robust safety feature by CEO Elon Musk. Right now, what Tesla calls Passive Autopilot is a far cry from what we can expect later this year in terms of Active Autopilot features and potential safety implications. A recent Tesla crash in Texas fueled the flames of debate regarding the efficacy of the system. Search warrants will be served this week by Texas police to secure data from the fatal crash, where CEO Elon Musk claims that initial data prove that the vehicle’s autopilot system was not engaged. Reportedly, no one was in the driver’s seat when the crash occurred. Two individuals were killed, one in the passenger seat and one in the back seat of the car.

Autopilot does not mean hands-free

We have heard many claims of drivers wanting to show friends how these vehicles can “drive themselves” and results have of course been mixed. Tesla’s Autopilot system allows the driver to temporarily take his or her hands off the wheel, but it still requires active engagement and oversight. These are not autonomous vehicles, but they are often treated as such. It is no surprise that drivers are provided a false sense of security by the technology. Musk claims that in this most recent incident, the vehicle’s semi-automated driving software was not the culprit. The investigation continues in order to resolve whether or not lane lines were able to be captured, and what impact that may have had on the crash.

The data are convincing, but don’t always translate to the real world

The scrutiny will continue as it should, but we cannot ignore the facts

At the end of the day, the data show that Tesla is manufacturing safer vehicles relative to most others on our roads. If we can encourage additional education on the autopilot technology and its efficacy this would go a long way to make our roads safer yet. Autopilot does not mean we can slide from the driver’s seat to the back of the car to make a sandwich and whip up a cocktail. The driver must always be present, attentive and prepared to make an adjustment if required.

Above all, advancements in driving technology need to be proven safe. It was reported that it took nearly four hours to extinguish the fire in this most recent Texas crash because of the vehicle’s lithium ion battery. The NTSB mentioned that the post-crash fire, along with the operation of the vehicle in the seconds and minutes leading up to the crash would be the focus of the investigation. Of course, the goal of active safety features and autopilot is to avoid any fire in the first place, and this will continue to be the laser focus of this rapidly developing technology.

Shares of Tesla dropped sharply early in the week, in part due to the Texas incident and a generally bearish overall stock market, particularly for growth stocks. Shares will likely climb as confidence is rebuilt. We will eagerly await what the future holds for fully autonomous vehicles.

Ross Gilbert reports Tesla news at Torque News. has had a lifelong interest in the automobile industry, growing up with an obsession for automotive news. As a typical gear head, he has spent many hours in the garage, working on cars. Gilbert covers Tesla, Electric Vehicles, trucks and automobile technology. Follow Ross on Twitter, Instagram and Facebook for daily Tesla and EV news.