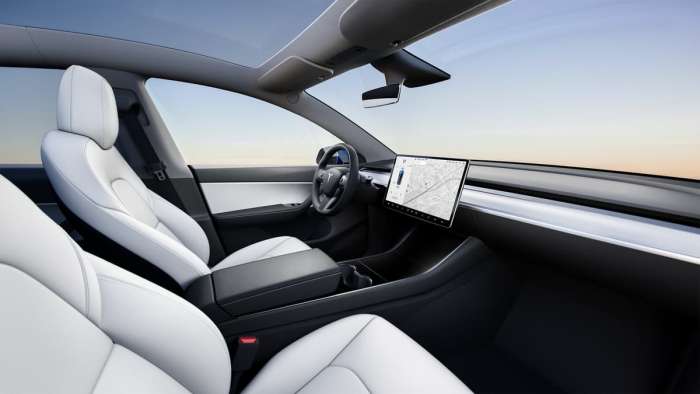 Tesla vehicles will now have to slow down driving through inclement weather conditions. This is a game changer for Tesla and for autonomous driving as a whole. This feature was added back in May, but there haven’t been many photos of it shown until recently.
Advertisement

A Tesla can now know when there is low visibility and can adjust by limiting the maximum speed . One criticism of previous iterations of Tesla’s self-driving software is that their cars did not handle bad weather well enough. The driver would often have to intervene in snowy conditions. There are some nuances and different things to consider when it comes to driving in bad weather.

This photo shows the infotainment screen inside a Tesla. The important thing to note is that the screen says “autopilot speed limited due to poor visibility". This is a great feature because the AI should know what a good speed is in bad weather. It is also good that the car is measuring visibility because it is a risk to drive too fast when there is low visibility. Even if the AI could handle driving fast when there’s poor visibility, it shouldn’t do that because the driver could have to take over at any time. The max speed shown in this photo was 75mph which is too fast when it is very wet or snowy, but this is still a great step Tesla has taken.

There is more work to be done

This is a great start for Tesla, but there are more steps that need to be taken if Tesla wants to get closer to achieving their goals of having full autonomy and Robotaxis. Autopilot needs to do more than just having a lower speed limit in poor weather conditions. The AI should know the difference between rain, snow, ice, and hail. The car should be able to adjust on a dime to the present weather conditions.

Driving in snow can be quite dangerous at times. In certain areas, there are many days of the year where people have to drive through blizzard conditions just to get to work. Tesla autopilot should have a special mode called blizzard mode. In this mode, Autopilot would only allow speeds of up to around 45-50mph. The minimum following distance could also be increased by a good amount.

The way forward for Tesla is to keep doing what they’ve been doing. The cars need to log miles driving in different types of weather conditions. The AI can then gather data about various road surfaces. The good thing about that is when the AI encounters a certain surface a second time it will know how to respond. A more obtainable goal for the AI is for it to be able to spot puddles and snowbanks with precision. Tesla is well on their way to figuring these things out and it is now apparent that Elon Musk and the team at Tesla are serious about improving FSD’s performance in bad weather.