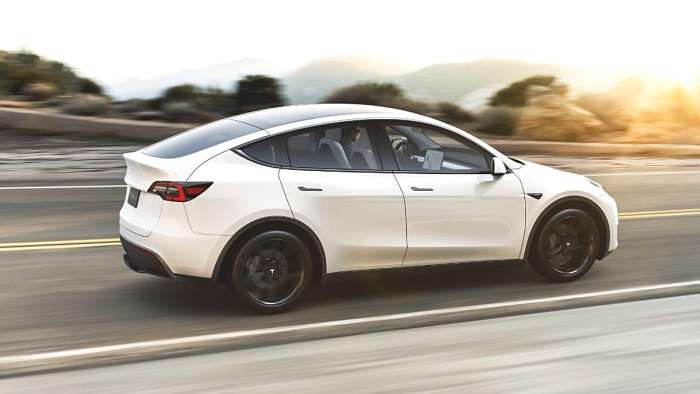 The Tesla Model Y just got an update with anew cold weather package. It is a software update that helps improve how the car handles cold weather. Tesla is trying to prove that its cars aren’t just for Southern California.
Advertisement

Tesla cars have run into some issues in cold weather.

In the past, cars such as the Tesla Model 3 have run into some issues in winter weather. These were major issues that could affect a Tesla owner’s daily use of the vehicle. Issues like frozen door handles have occurred on Tesla’s. The window would not move when the door handle was pulled out. Sometimes the door handle wouldn’t even move at all. This led to a series of tutorial videos showing all these secret hacks on how to open the frozen door. Here is a video of someone struggling to open the car door on a Tesla 3.

Speaking of the exact temperatures, there hasn’t been much indication as to exactly how cold it has to be to encounter frozen door handles in windows. However, many Tesla’s were having these types of issues in sub-zero temperatures.

This is what stopped the door handle from freezing

There are many cars out there in which door handles can stick in frigid conditions. However, Tesla’s original door handle design would get tripped up in cold temperatures. This was remedied by making it so the door handles could be pushed on both sides allowing the ice to be broken much more easily.

Freezing charge ports have also been an issue in colder weather. The charge ports would usually freeze while the car was plugged into the supercharger. This is another frustrating scenario, but the good news is that there is a solution to this problem now. That solution comes in the form of a heated charging port.

How the Software Update has improved cold weather capabilities

Now Tesla has come out with winter weather improvements for the Model Y like they did to the Model 3. This update is labeled as Tesla’s 2021.4.12 version. There are minor additions to note for this update. Tesla has been improving their cars in order to perform in the winter. They have been working for it for some time, so they haven’t been caught completely flat footed. Sadly, Tesla does not go into much detail as to what’s actually in this update. Users reported better braking in snowy conditions, but there are likely more facets to this new update than that.

Other than the braking, which has been an improvement, we can only speculate for now as to what else Tesla has included. In the past, drivers had complained about the battery range on their Tesla decreasing more than usual in the extreme cold. That is one thing this update could have addressed.

The wording of the actual update was short. It did mention information about bug fixes. It would be nice to see how else the performance of the car is improved in the snow as a result of this update. The Notes on this update do suggest that performance was improved in some way. The other conclusion could be that this is just a minor update and there is something bigger coming in the future.

Tesla seems to have made some low-key improvements with this recent update. The regenerative breaking improvement is probably the most important component. Drivers might be reporting increased range on their Tesla.

What this Update means. This new comes on the heels of the Model Y’s first winter. There will likely be more updates to come.

We want to hear from you

If any Tesla owners have this new update on this car, we want to know if there is anything different when out driving. Are you getting more charging range? Is the car slipping less?