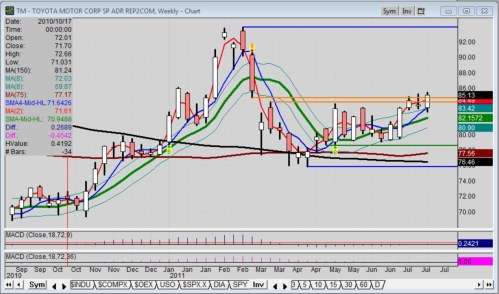 Toyota stock finally breaks out above May price gap

It was just a few weeks ago that Toyota Motor (ADR: TM) showed signs of filling past overhead resistance on the weekly chart, the early March price gap of 84.76 to 84.28 which was tested and failed in May. While that event in a way extended the gap in time, the stock closed Thursday above the gap at 85.47, a significant technical event. [Friday Market Close Update: TM closed at 85.01, still above the gap, but barely.]
Advertisement

For the record, Toyota Motor (ADR: TM) stock did indeed fill the gap a few weeks ago (Ref - orange lines on chart shown), but then proceeded to reverse below it; and that was viewed here as a potential ominous sign. Now the question is, will the latest close above the price gap hold, and for how long?

From a technical analysis viewpoint, that is significant, because it shows strength in its price dynamics. Another question now is, will this be confirmed by today’s price action?

As we search for meaning and cause behind any price dynamic, sometimes it’s simply a matter of time; as W.D. Gann, the legendary trader, once wrote that time is more important than price.

As reported here at Torque News, Toyota stock started the entire up-move weeks ago, then broke the early May high of 84 by closing at 84.16. Question at the time was, could it be the breakout to higher highs? And, if so, would it be the result of all the 2012 Camry news on the web, like the TN article by Patrick Rall? Read: The 2012 Toyota Camry leaked in video and pictures

Then a few days later, another TN writer, Hawke Fracassa, wrote an article about the return of Toyota to full production levels after the tsunami in Japan negatively impacted suppliers. Read: Toyota bounces back in a big way .

Well, those two fundamental events were certainly significant enough for stock investors to pay attention. However, once fundamental news comes out, it then becomes a matter of watching the market reaction to the news.

As a point of reference, between the weeks 3/6 and 3/20 there was a definite price gap of 84.76/84.28, which, from a technical perspective, I noted would need to be filled and broken higher to confirm any breakout to the upside.

But I also cautioned TN readers at that time that TM might pause when it fills that gap between 84.76 and 84.28; and surely it did, enough to make me even question if it might trend lower. Yesterday’s price action now proves that trending lower will have to wait. Fact is, Toyota fundamentals, are still intact; and traders are reacting accordingly.

The next big question

Now that Toyota stock has officially filled, paused, shot lower and now closed above the gap, question is, what’s next? Will Toyota stock trend higher to its next level of upside resistance?

Again, for the record, the fundamental story behind TM has not deteriorated. Furthermore, clearly defined swing patterns have been the modus operandi of Toyota stock lately, especially on daily charts. And Toyota stock has a knack for gaining momentum for some great profits, which is ideal for short to mid-term traders, also known as swing traders.

Using the weekly chart again for a trend bias evaluation, Toyota Motor Company (ADR: TM) stock still looks like it is still trending up. That gap fill, reversal, followed by yesterday’s reversal again upward is simply a step in the action we call price dynamics.

I realize many are still looking for a cause, such as the 2012 Camry news and the return to full production on other models after the tsunami. While both are appropriate to consider, I still prefer price action, as I believe all trading decision must be predicated on market response to news, not the news itself.

Point is, with demand for high-efficiency cars being high, the profit potential for Toyota is surely intact. Now it's s matter of trader sentiment.

Bottom line for me as a trader is this: While I personally prefer technical analysis to time my trades for Toyota stock, even if I only trade options, it can be comforting to know there is a fundamental reason behind the price dynamics. However, my entries are seldom based on fundamentals, but on price support and resistance.

For the record, TM opened Friday at 85.22. And while this reporter wondered if it would hold above the gap, the market spoke by closing TM at 85.01, still above the gap.

LG's New EV Battery Plant Is a Welcome News for Tesla
Tesla Giga Berlin's New Hurdle: It's Not Only the Gov't, but Now Tesla Itself
END_OF_DOCUMENT_TOKEN_TO_BE_REPLACED