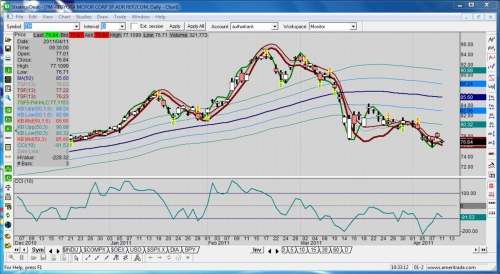 Toyota announced a 3-day production schedule for the remaining days of Easter week in April, according to a news flash on CNBC this morning. Question is, in light of more earthquake reports, might this new schedule last longer?
Advertisement

The stock chart has shown a downtrend ever since the earthquake. And the recent news may indicate the schedule could last through June, according to one assessment on CNBC.

Another fact is, Bloomberg reported Toyota Motor Corp. (NYSE: TM), the world’s largest carmaker, may lose production of an estimated 35,000 vehicles at its 13 North American factories between March 11 and April 25 simply due to a shortage of key components from Japan.

Furthermore, Bloomberg reported the Toyota City, Japan-based company plans to suspend production on April 15, 18, 21, 22 and 25 at its plants beyond the U.S., that will include Canada and Mexico.

As an auto stock tracker, Torque News reports mainly on events that affect production on automakers. From a fundamental analysis viewpoint, any production cutbacks, regardless of the reason, has a negative affect on earnings and the price of stock going forward. Such is the case with Toyota stock which traded above 90.

For the record, Toyota stock had shown a pattern of higher highs and higher lows after the U.S. government announcement that Toyota electronics were not the cause of unintended accelerations. Since that time, though, the earthquake in Japan has affected production for key parts being shipped around the world from Japan.

Since the stock’s double top at the end of February in the 94 range, Toyota stock has languished down to its present level below 77. The chart shows the stock trading well below its 50-day moving average, a key technical tool that traders use to define bullish and bearish positions.

For the record, the 10 day CCI indicator (Commodity Channel Index), has been below the zero line since early March. For traders, the CCI will have to move above the zero line to be bullish.