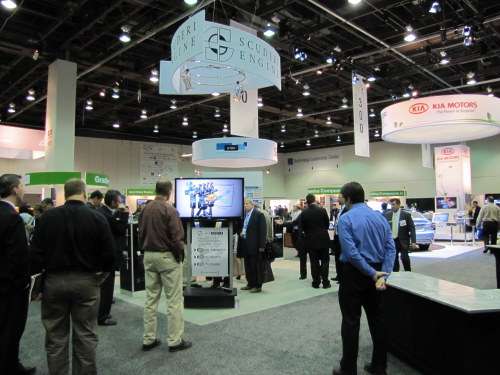 With engine variations growing from its basic split cycle to its air-hybrid version, Scuderi has now discovered how to make its patented split-cycle engine smaller while increasing power and reducing fuel consumption. SAE papers officially avail on April 13.
Advertisement

The company found when the Miller cycle, a well-known combustion process, was applied to its split-cycle engine design, the brake specific fuel consumption (BSFC) decreases by 14 percent while power increases by 140 percent. That is the basis for the technical papers to be released on Wednesday morning.

No wonder Scuderi won the innovation award at last year‘s SAE. One year later the company actually finds another breakthrough. What automaker would turn down a return on invested time like that?

Fact is, Scuderi Group is an engine development company that is literally re-engineering the conventional four-stroke engine to advance fuel-efficient engine design as no other.

Today the company showed how just how much further it has gone toward efficiency. It introduced details at the Society of Automotive Engineers (SAE) World Congress (Booth No. 419) in Detroit’s Cobo Center of a technical discovery that not only enables maximum levels of power and torque while reducing the rate of fuel consumption, it enables engine size to be reduced.

This new engine design has the potential to help automakers cost-effectively reach 2016 federal fuel-economy standards for 35.5 miles per gallon, while maximizing the amount of power consumers can extract from a tank of fuel.

The result of the Miller cycle integration with the Scuderi split-cycle engine is a smaller, higher-performing engine that has the potential to produce more than 30-50 percent greater miles per gallon, which is what the split-cycle design achieved before the Miller addition.

Currently, the new engine innovation is being tested by the independent lab, Southwest Research Institute, on a 2011 Nissan Sentra with official results to be revealed in the coming weeks after World Congress.

Studies have concluded that the new engine design, when boosted with a turbocharger to 3.2 bar, decreases the BSFC (or brake specific fuel consumption) up to 14 percent, as a simultaneous increase occurs in the engine’s power BMEP (or brake mean effective pressure) by 140 percent. At the same time the engine can be reduced in size by roughly 29 percent.

Consistent with conventional four-stroke engine designs, the combustion cycle of the Scuderi™ Engine has two high-pressure strokes—compression and power, and two low-pressure strokes—intake and exhaust. The power stroke is deemed positive work, whereby the energy that is produced by the expanding gases creates mechanical work.

“The Scuderi Engine gains a massive advantage from turbocharging, Miller-like valve control strategies and extended expansion that is simply not possible with conventional engine designs,” said President of Scuderi Group, Sal Scuderi. “The net result is a smaller, higher-performing engine that yields significant gains in volumetric efficiency and power as well as reducing BSFC. Studies are underway at the lab that will be announced in the coming weeks, that will show impressive results of the Scuderi™ Split-Cycle engine modeled in a 2011 Nissan Sentra. ”

Along with the SAE exhibit

The Scuderi Engine will be featured in two technical paper presentations on Wednesday, April 13 at the Detroit Cobo Center. They are as follows:

To listen to an audio podcast of Sal Scuderi discussing the recent lab breakthrough, you are invited to visit: http://www.scuderiengine.com/turbocharging.

For the record, this TorqueNews reporter has an appointment on Wednesday with the Scuderi team at 2:00 on the exhibit floor to discuss these findings further, and how they will impact the industry.