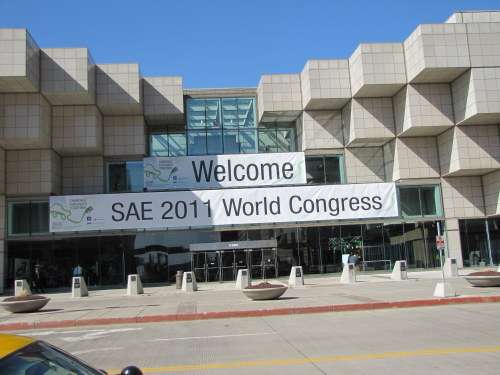 Compared to last years SAE World Congress, this year’s event has major OEMs like GM, Kia and Nissan showing off their electrified technology; but, as usual, Ford wins the race in displays.
Advertisement

For the record, Ford was entwined with Magna last year for a special display, while GM engineers could barely answer questions. I know; I was there. This year is different, though.

OEM attendees at this year's SAE World Congress include GM, Ford, Chrysler, Kia, Infiniti, Nissan, Honda just to name a few. And their willingness to show their technology is notable; of course, not the super-advanced stuff.

Still, see General Motors (NYSE:GM) as the most improved with its display of electrified vehicle technology, including a home energy storage unit from LG Chem. The company showed Buick’s eAssist™ system as an adjunct to the larger and more expensive Chevy Volt drive technology.

Kia sure did itself proud, too with that 8-speed automatic transmission. While Infiniti showed a hybrid with the dual clutch to segregate the electric drive from the gasoline engine drive; quite impressive.

And do not forget to visit the Nissan Leaf display. Although the company was missing in action at the NAIAS 2011, it was all in at the SAE World Congress. Fact is, the car is not as small as some might think. The interior looked very roomy, and the dual-charge ports says the Nissan Leaf can handle 110v, 220v or 440/480 volt fast charging.

A complete display of the battery on the chassis layout said more than any billboard could ever convey.

On the other hand, Ford had its usual show it all display, complete with engine, electric drive, charging system, battery system and an IP to show the interior interface.

Out of all the neat display among the suppliers like Magna and others, I found FEV to be unique and one step above everyone else. I found and tweeted earlier on their ATAC engine technology which allows a CNG engine to run with the efficiency of diesel. According to company reps, CNG does not have the energy density of gasoline. So, their skunkworks project sets a new tone for natural gas cars by extending the driving range simple due to gains in efficiency.

The SAE 2011 World Congress is not any larger than last year, at least in floor space, but the technology spread was far more varied, in my opinion. I especially appreciated the interview with 3D Objet, makers of the 3D printing prototype machines. Their latest material enables the creation of clear plastic parts for lenses and light pipes. Pretty cool!

But the software which allows the driver’s seat to program subtle changes via seat positions made my day. Fact is, it was invented by Dr. Paul B. Phipps, a chiropractor. Who says SAE contributions can only come from engineers?

I have plenty of pics and video interviews which will be released shortly. So stay tuned to TorqueNews.