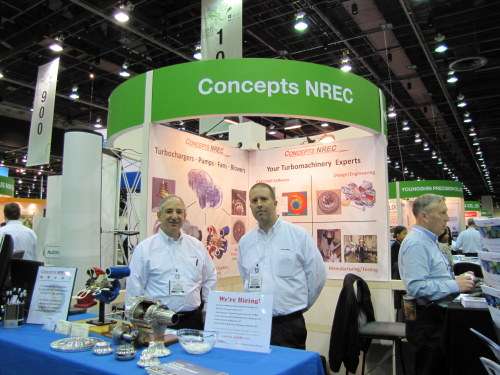 SAE 2011 World Congress more important to auto industry than ever

Along with all the technology displays, the very existence of the SAE World Congress at Detroit’s Cobo Center has proven once again its importance to the auto industry. The on-floor video report also includes a look at using a human-computer interface to input real movements of automotive assembly into the virtual world for study and process efficiency.
Advertisement

The picture shows the Concepts NREC booth whereby Fred Becker and George Zitka probably threw away more knowledge about turbo charging than I ever learned in my entire career. Of course, the CEO and Owner, David Japikse, is on the right; he is author of multiples of books on the very subject. More on their company and matching turbochargers to engines in a more-focused report.

It may be my chosen TorqueNews.com assignment for the week, but the SAE 2011 World Congress is always an enjoyable one. It allows this early-retired design engineer to rub elbows once again with the some of the real idea makers of the auto industry; but not all of them come from OEMs, but Tier 1, Tier 2 suppliers and beyond.

One element is clear: Collaboration is in, even between competitors who use government money to develop the basics of new technology breakthroughs. The walls of separation between industries like aerospace, energy mangement and automotive have now come down, as technology that was once reserved for autos, is now being distributed to non-auto entities and vice versa.

Witness the LG Chem lithium-ion battery home energy storage unit. It uses the very same battery pack technology used in the Chevy Volt. It just doesn't require all that downsizing to fit into an automobile; and it doesn't have to meet the stringent automotive environment.

Point is, autos and other human activities are getting connected as never before; and you can thank the electronics world and computers for much of that, not to mention the government involvement by contributing your tax dollars into research through our national laboratories. Recall how much the world gained simply from the space race and government involvement as partners with free industry.

Still, no matter how much industrial designers and stylists like to think that they “design” the cars, it is the engineers and the technologies they employ that comprise the basis for real automotive product success. You may be drawn to that hot-looking body style, but if the seats do not function well, or the power from the engine do not satisfy your needs, the style really returns to nothing impressive; at least until some engineer fixes all those shortcomings. Yes, the ingenuity and drive of the hot rodder is alive and well even in the SAE world.

That is why I take a shot or two now and then at auto writers from large media firms who kick the industry or a particular vehicle, when they themselves have never designed a part let alone a car in their life; or had to make compromising decisions between function and cost to meet a market target. That is the life of the automotive engineer; far more intricate than just writing about it.

Today’s video report from the floor of Detroit’s Cobo Center simply gives you the flair and feel of the room, while I relate my own feelings about the importance of SAE World Congress to the auto industry. After 39 years in the industry whereby I now report on automotive technology, I surely appreciate the skills and ingenuity of the inventors all the more.

As you can see, breakthroughs are now coming in the form of software which allows human motion to be viewed in virtual reality so an operator can experience the hand and body movements necessary to assemble a part on a vehicle. With virtual technology, we have truly entered the 21st century in a way that we will never be the same.

Also take for example the Scuderi split cycle engine. My interview with Sal Scuderi on Wednesday (which I will report in a future article) showed a major gain in the split cycle technology and its complementary ability to achieve more gains from the Miller cycle than Miller ever imagined. I’ll have more on that technology as we go forward after the show.

As I wrote yesterday, I found FEV to be unique and one step above everyone else as well. Their latest engine technology allows a CNG engine to run with the efficiency of diesel. Yet, while they are achieving that, the split cycle engine of Scuderi already allows the swirl needed to get full atomization due to its sonic velocity; and, furthermore, includes the ability to use diesel fuel at much lower fuel injection pressures. Point: Notice the synergies and the cohesive thinking of two totally different companies.

Be apprised that any year’s SAE World Congress is never as large as the NAIAS or even an Autorama for that matter, but its content is never less significant.

I still have plenty of pics and video interviews to share which will be released as the days and weeks go by. So be sure to stay tuned to TorqueNews.