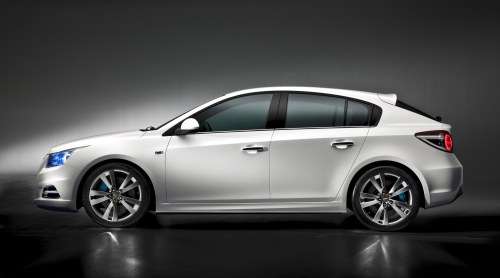 It pays to be global-news minded these days. Some gets filtered our way as well, like a Monday morning report on Sunday evening; and the latest buzz on the web is about the Holden Cruze. That’s right, not a Chevy, but a Holden version including the 5 door hatchbback to be built down under.
Advertisement

In case you’re new to global automotive thinking, Holden is GM down under. The Cruze hatchback shown here was also shown in Paris. It was designed in Melbourne at the Holden Design Studio.

Now, according to Australian news sources like carsales.com.au and carpoint.com.au, Holden will introduce hot hatch and sedan models to the Cruze line-up once the model is made locally there next year.

The rationale is to switch from sourcing the Cruze sedan from Korea to making it at its Elizabeth plant, near Adelaide.

It wasn’t that long ago, though, like October, that Opel was being viewed as a possible re-badged candidate or a platform for new Holden vehicle to compete with Volkswagen there. Of course, denials by GM filled the air at the time. Now, a decision on the return of Opel cars to Australia is supposedly imminent.

Reports in Australia also indicate Holden had already confirmed that it will make diesel and petrol versions of the Cruze locally, but until last Friday had not confirmed the 1.4 turbo four-cylinder version. It seems they like the 1.4 turbo better than the 1.8 liter version.

For the record, a reader of the Carsales Network related that a camouflaged Cruze sedan with a turbo whine was seen on Melbourne's Eastern Freeway last month.

I wonder how much the problems with North Korea had on Holden’s decision to pull production of the Cruze back home. At least it’s not a rebadge situation.

For the record, I worked on rebadging the Opel Astra into the Saturn Astra. We had to federalize the interior as well as the fascias to meet crash requirements. It was a fine car. Problem was, Germans smoke in their cars, and Americans drink. So, we had to add cupholders as well. Problem with rebadging is that you cannot change the platform, like moving the parking brake handle. Not an easy task, so you end up compromising.

Frankly, I got along with the Germans at Opel, but they were not easy to accept American thinking at times. So, I would understand if Holden had any reservations.

In the case of the Holden Cruze, though, it may not be as up-level as the Opel to compete with Volkswagen. Nonetheless, the Cruze platform is more robust in meeting the needs of the Australian small-car auto market, since it’s already one of their own.

Still, whatever comes Holden's way, their team is qualified to meet any and all challenges. Having worked with some of their designers and managers, I found them to be team players, smart and highly energetic.