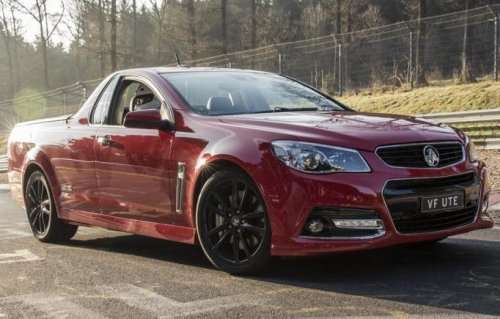 General Motors has announced that their Australian sold Holden VF SS V Redline Ute has claimed the title of being the quickest truck around the famed Nürburgring – although many Dodge Ram SRT10 and Ford SVT Lightning F150 owners will question the legitimacy of the title since the Holden Ute is a very different “truck” than those American sold go-fast pickups.
Advertisement

While the Holden VF SS V Redline Ute is more of a modern day Chevy El Camino based on the Holden Commodore than it is a real pickup truck – there is no denying that this is a vehicle with a bed and that allows GM to claim the new title. Technically, GM’s Holden brand is claiming that their VF SS V Redline Ute has claimed the Nürburgring Nordschleife lap time title among “commercial and utility vehicles”…which is a fancy word for saying that they have the quickest truck around the track better known as the “Green Hell”. In the long run, Holden’s recent time of 8 minutes and 19.47 seconds makes the VF SS V Redline Ute the quickest truck because there is really no other competition.

In hunting around the internet a bit, I was unable to find any legitimate times for any “real” trucks lapping The ‘Ring and the closest utility vehicles that I can find on FastestLaps.com are the BMW X6 M with a time of 8:24 and the Porsche Cayenne Turbo with a time of 8:33.99. In short, the Holden VF SS V Redline Ute is able to claim the title of being the fastest truck around the Nürburgring because there aren’t any other attempts at the records by “real trucks”.

"We came up with a plan to tackle the Nürburgring and break the world record for a commercial or utility vehicle but when we did our research it seemed one didn't exist, so we decided to set a record instead!" said Rob Trubiani, Holden Dynamics Engineer and the driver of the VF SS on the record setting run.

The Holden VF SS V Redline Ute is powered by a 6.0L V8 sending 350 horsepower and 381lb-ft of torque to the rear wheels via a 6-speed automatic transmission but the real story behind the VF SS Redline is the specially tuned sport suspension, Brembo brakes with 4 piston calipers and lightweight alloy wheels wrapped in the biggest high performance tires that have ever come from the factory on a Holden production vehicle.

"For any car enthusiast the Nürburgring is like the Holy Grail. It's the toughest, craziest, most demanding race track in the world and for the Ute to handle everything that was thrown at it and set the time we did shows what an exceptional vehicle it is," said Trubiani. "The Nordschleife section of the 'Ring is the ultimate test of man and machine. It's 20.8km long and has more than 170 corners with huge elevation changes and multiple surfaces – there is no tougher test for a car and its dynamics. If a vehicle can handle The Green Hell it can handle anything and proves yet again that Holden's testing and development processes produce world-class cars with world-class handling."

Whether or not the Holden VF SS V Redline Ute is really a pickup truck or not, there is no denying that the lap time of 8:19.47 is an impressive feat. Vehicles that have turned similar times at the Nürburgring include names like the Chevrolet Camaro SS, the Lexus IS-F, the BMW E46 M3 and the BMW M135i. With the exception of the M135i, those are all older vehicles but it still shows the kind of performance put out by the General Motors’ Aussie Holden brand as the folks Down Under do their part to give the massive American automaker more bragging rights in the global performance market. Best of all – there is a video of the VF SS Redline Ute making this record breaking run complete with running play-by-play of the run and we have included that below. Enjoy!

Tesla Contemplates A New Strategy for China Retail even As Sales Boom
Jay Leno on Elon Musk & EVs: “I Think He Should Get ... Credit"
END_OF_DOCUMENT_TOKEN_TO_BE_REPLACED