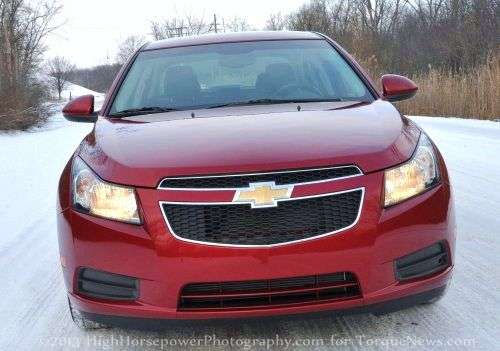 The Chevrolet Cruze diesel set to debut in the Windy City

We have known for months now that GM would be launching a diesel powered Chevrolet Cruze for the US market and it appears as though the new Cruze Eco-D will make its grand debut in nine days at the 2013 Chicago Auto Show.
Advertisement

Unfortunately, since announcing their intentions to offer the Chevrolet Cruze Diesel in 2011, General Motors hasn’t had much to say about their super efficient clean diesel powered compact sedan. Really, nothing is known about the upcoming diesel drivetrain option shy of the fact that it will be known as the Cruze Eco-D. However, based on what we know about the diesel powered Cruze at work in Europe – we can make a few guesses as to what we might see in Chicago next month.

First of all, if the American sold Chevrolet Cruze Eco-D uses the same diesel engine (or a similar engine) to what is used in other markets in the Holden Cruze, this super efficient model will be powered by a 2.0L 4-cylinder turbo diesel. In Australia, this engine offers 161 horsepower and 266lb-ft of torque so if it carries over those specifications; the Eco-D will easily be the most powerful option in the Cruze lineup. More importantly, this output would make the Cruze diesel quite a bit more powerful than the popular Volkswagen Jetta TDI that offers “only” 140 horsepower and 236lb-ft of torque.

All of that power is nice but like the VW Jetta, the Chevrolet Cruze Eco-D will be marketed as an option that packs big power and even bigger fuel economy figures. Early rumors indicate that the Cruze diesel will offer as much as 50 miles per gallon and assuming that is a highway figure – the Eco-D will offer somewhere in the area of 20% better fuel economy figures than the Jetta TDI. The one problem with that is that the Australian diesel Cruze offers a combined number of 6.7L/100km – which converts to only 35.1 mpg when mated to an automatic transmission (no manual is available). To see how the Australian figures compared to those in the US fuel economy numbers, I looked at the ratings of the 1.4L turbocharged engine already available both here and Down Under.

According to the Holden Aussie site, the Cruze SRi with a manual transmission and the 1.4L turbo 4-cylinder engine uses 6.6L of fuel per 100km and that coverts to 35.6 miles per gallon (which you may notice is actually better fuel economy than the diesel Holden). Mind you, this is a combined figure that considers both city and highway driving but there is obviously some difference in the testing or reporting process as the American Chevy Cruze LT with the same 1.4L engine offers 30mpg combined. This represents a difference of about 18.5% so if we assume that the Cruze Eco-D will see similar differences- the diesel Cruze could have a combined figure in the area of 29-30mpg combined. For comparison, the Cruze Eco that is currently available in the US offers an average fuel economy figure of 33mpg with the manual transmission and 42mpg on the highway – a fact which would lead us to question the fact that the Eco-D will offer 50mpg with the same drivetrain as what is used in the Holden Cruze. Then again, we should keep in mind that those 50mpg figures are just based on rumors but it seems logical to expect that the Cruze diesel would be among the most efficient options in the lineup even though the diesel Holden Cruze sits in the middle of the lineup in terms of fuel economy ratings.

In any case, the 2014 Chevrolet Cruze Eco-D should make its debut on February 7th or 8th at the 2013 Chicago Auto Show and at that point, the speculation on which diesel engine the Cruze will feature along with the guessing on the specifications should be over. The diesel Cruze will likely carry a small take rate in the early going but with the growing popularity of diesel powered passenger vehicles in the US – GM is making a smart decision to make a move to cut into the diesel sedan monopoly held by the German automakers.

The American auto market has traditionally been less receptive to diesel cars than buyers in Europe but with the advancements in clean, quiet diesel technology – the combination of power and efficiency is progressively becoming more popular among American buyers. The Cruze will be the first modern American car sold with a diesel engine while automakers including Mercedes Benz, BMW and Volkswagen have been offering these engines for years. The next generation Mazda 6 that is reaching dealerships now will soon offer a diesel engine option and the Chrysler Group has taken their shot at the diesel segment with the introduction of the 2014 Grand Cherokee with a 3.0L diesel V6.