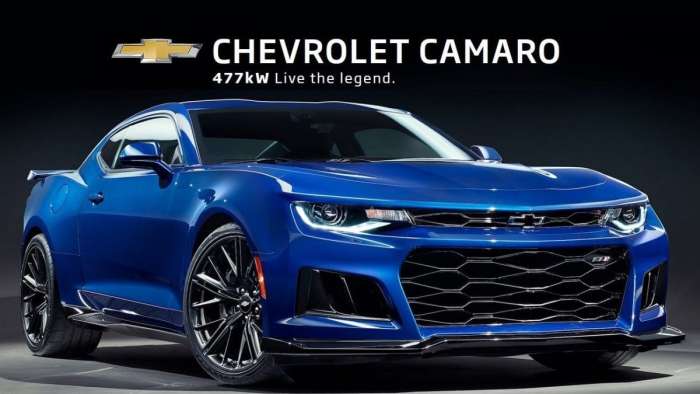 The Camaro ZL1’s LT4 engine is the same as the one used in the USA, but a different measurement method leads to a lower official rating.
Advertisement

Holden Special Vehicles (HSV) has begun the process of converting the Chevrolet Camaro ZL1 to the right-hand-drive configuration that is required of new cars in Australia. With the long-awaited arrival of the new ZL1 in the Aussie market comes the official power rating of 640 horsepower. However, the driving experience of the Australian version will be identical to the American version, as official power ratings are measured differently in the two countries, accounting for the 10 horsepower difference.

Most Powerful HSV Vehicle Ever
The Chevrolet brand doesn’t have a corporate presence in Australia, meaning that there are no dealerships that specifically sell the brand under the organization of General Motors. This means that if you want a Camaro or Corvette, you have to go through a pricey importer who will also have the car converted to right-hand-drive, but with the demise of the high performance Holden Commodore, Holden Special Vehicles has turned their attention to the new Camaro.
More specifically, HSV is importing and converting the new Camaro ZL1 for the Aussie market, leading to the most powerful car that the high performance brand has ever offered.

However, everything else is the same. The power is sent to the rear wheels by means of a 6-speed manual or a 10-speed automatic transmission, the interior features and options are the same and the overall exterior appearance is the same. Of course, the key difference is the fact that the steering wheel has been moved to the right side of the car, but other than the changes made to accommodate the right-drive layout, the Aussie Camaro ZL1 is identical to the muscle car tearing up American roads.

Prior to the Camaro ZL1, the most powerful HSV vehicle was the GTS-R W1, a Commodore super-sedan with the LS9 from the American C6 Corvette ZR1. The GTS-R offered 624 horsepower, so as is the case in the US, the new LT4 is slightly stronger than the LS9.

Rare and Expensive
While HSV is making it possible for Aussie drivers to buy the new Camaro ZL1, it isn’t easy and it isn’t cheap. HSV plans to convert 300 ZL1s to right-drive and roughly half of those are already spoken-for, so there are less than 150 remaining. More importantly, the local pricing for the HSV-converted ZL1 is $159,990 with the 6-speed manual transmission, while the automatic model starts at $162,190.

When you convert $160,000 to US dollars, Aussie buyers are paying around $111,000 for a car that costs $62,000 in the US, meaning that the process of shipping the cars to Australia with all of the proper paperwork and converting them to right-drive for local use costs buyers down under $49,000 (USD).