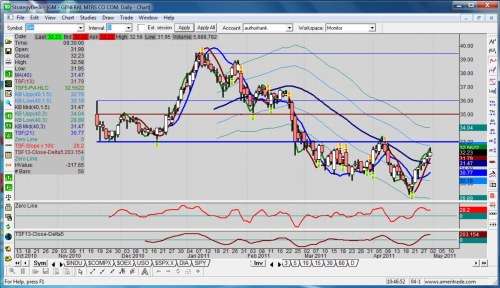 While Shanghai GM was named the Best Car Manufacturer and the new Chevrolet Malibu the Most Eye-Catching Car Model yesterday at the Auto Shanghai 2011 Grand Awards, GM stock has been awarded by investors with more buyers than sellers recently. The GM stock chart gives the technical picture.
Advertisement

GM stock is now trading above its 40-day moving average, but still below its IPO offering price of 33 and IPO opening of 35.

For the record, GM stock first closed below 30 on April 18th. Since then, the stock traded intra-day as low as 29.17, but has rallied to its present intra-day price just above 32.

According to GM media resources, the awards were jointly organized by the auto show’s organizing committee and several mainstream media. About 5.2 million votes were cast during the 10-day exhibition.

Shanghai GM showcased a broad range of production and concept vehicles under the Chevrolet, Buick and Cadillac brands on its stand at Auto Shanghai 2011. The new Malibu, for example, was making its worldwide debut; and was one of more than 1,100 vehicles from global and local automakers on display at this year’s leading auto show in China.

The new Malibu is Chevrolet’s first global midsize sedan. It offers style, fuel efficiency, content and features, craftsmanship, and dynamic capabilities that rival high-end sedans. It will go on sale across China later this year. It will also be rolled out in nearly 100 other countries on six continents.

Aside from earnings reports, it is subjective. Charts, though, provide a quick view of where the buyers and sellers are changing their minds on who will be in charge.

Anyone who watches the charts auto sector stocks will see the similar chart patterns when all other factors are equal. Fact is, some problems are equal, like the falling US dollar and the tsunami effect in Japan on key auto part supplies. Other problems are specific to the auto stock.

One look at the GM stock chart will notice that new post-IPO low of 29.17. That is definite price support, because GM stock has risen since then; and that low will remain as support unless the market decides to choose a new level.

The upper bound is still the high of 39.94. In other words, we finally have a range by which GM stock can trade within.

Should we go away in May, as the old stock market adage states? The conundrum is, where will you place your money? Cash certainly isn’t paying much these days, but buying stocks requires buying wholesale not retail; meaning, the lower end of a range, not the upper unless proven technically to be a confirmed breakout. GM stock is far from that level.

Frank Sherosky wrote on April 29, 2011 - 11:10am Permalink
Important to note that GM’s largest national market is China, followed by the United States, Brazil, the United Kingdom, Germany, Canada and Italy.