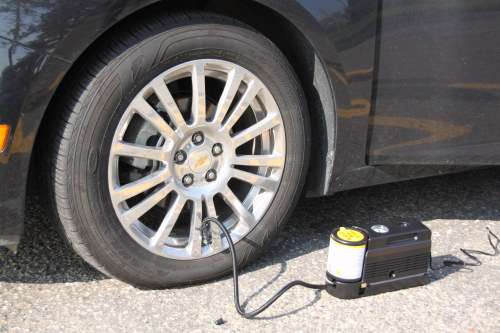 Imagine getting a flat tire on the freeway. Now imagine reaching into your trunk, not for a spare, but for an inflator; and all because some automotive marketer says it’s faster and supposedly enables better gas mileage.
Advertisement

That is the new world of stretching the truth about automotive efficiency these days, where marketing feeds the attempt to cover up for a lack of quantitative and substantive gains in miles per gallon. And investors in auto sector stocks as well as consumers should be concerned to read between the lines more.

Consider the latest Chevy Cruze philosophy contained within its latest news release : proudly state how a simple weight saving by removing the spare tire contributes to highway mileage, while neglecting any addressing of city driving in the process.

From this reporter’s experience, this is forcing the public to swallow a small tech gain to hide the greater truth. It’s also ludicrous to think an inflator is the absolute safest position in all cases as stated in the release, but I digress.

In regard to MPG, this reporter believes automotive marketing has taken a new twist: using all the available tech information to tout how a company is getting better mileage, but use only the highway number because the public may not notice the city driving figure is anemic at best.

Granted, changing a flat tire on the side of a busy freeway can be a dirty and dangerous job. Come to think of it, so is changing any tire in my home town of Detroit or any other inner city. So, there is a time and place for the inflator for sure.

According the latest news release, though, in this case info-news (read infomercial) for the 2011 Chevrolet Cruze, the inflator is touted as the safer option in the form of an on-board tire inflator kit that fills ¼ inch holes in the tread AND just so happens to improve fuel efficiency by shedding 26 pounds of spare tire and jacking hardware.

Do not get me wrong. I like saving weight just as much as the next guy; but I also like my family being safe at all ends of the driving situtation spectrum, especially when traveling.

So, my problem is not so much pulling out a tire inflator, but which is the safer bet in every precarious situation. Getting better highway mileage doesn’t help me if and when I need a complete tire change on some lonely road in Michigan‘s Upper Peninsula. Tell me, will OnStar deliver my family there or in downtown, or even mid-town Detroit?

Sure, I agree the tire inflator is faster; it prevents the need to pull out a jack. That’s great for fast changes on highways, and maybe an the inner city situation. The bigger question is, what happens if the tire cannot be reinflated? I guess it’s Call 911; but that’s only if the police will come out in time to protect you. Heck, we can’t get EMS to come out in a timely manner for an accident. The city system is broken, and the auto technology is not accommodating that very well.

Likewise, my other concern as a consumer and an auto news reporter is reading a marketing ploy within a message that promotes improved gas mileage when the truth is, the gas mileage for city driving still sucks.

That tells me the marketing stretch (read ploy) is hiding the simple truth that city gas mileage for most U.S. made compacts is still beneath the needs of most American consumers.

After all, isn’t 40 miles per day supposed to be the EPA bogie for driving range of an EV? If so, then ought the city gas mileage meet at least 40 mpg (preferably 50 mpg) at the very minimum for every vehicle, not just a special Eco version with a manual transmission? Point is, at $4 per gallon and above, that’s still not so great; meaning the automakers have a lot of work to do still.

If saving 26 pounds by removing a spare tire (that was already downsized, by the way) makes that much of a difference, then what else can or should we shed? What’s next, limiting passengers? Let’s throw out the radio in favor of mini-me radio. Take the foam out of the seats and the carpeting while we’re at it.

See, I know BS marketing stretches when I read them; and this one borders heavy on Blatant Smoke.

I also know for a fact there are engine technologies out there that have the potential to deliver not only better highway mileage, but city mileage where we do most of our driving anyway; plus allows you to keep your spare tire.

Instead of just direct fuel injection, variable-valve and cam timing plus turbos, which are great technical achievements, why not go the full-efficiency route for the internal combustion engine. Think split-cycle air hybrid like the Scuderi. And to really think out of the so-called box, why not think external combustion steam engines like Cyclone Power (Yes, I own a few shares in my IRA).

But, if you insist on electrification, damning all torpedoes in the process, then at least consider high-energy capacitors in lieu of expensive and weightier lithium-ion batteries for energy storage. For crying out loud, get the cost down! The industry has certainly been paid enough in government subsidies to at least warrant that kind of benefit.

Yet, the auto industry is concentrating on electrification with expensive lithium-ion batteries as though that was the only way to make a hybrid. Whatever happened to the zinc-air technology?

I realize, for obvious government-relations reasons, GM has bought the farm on the electrification of the automobile, which explains their lack of support for natural gas as a fuel. No, they would rather put the burden of the electrification product expense totally on the consumer upfront. Let the consumer pay for it; and let the taxpayer subsidize it.

For the record, GM and all other automakers will still sell far more gasoline-powered vehicles than hybrids for one simple reason. They are more affordable.

So, I challenge GM, Ford, Chrysler, Toyota and the rest to stop the MPG marketing insanity. We’re not dumb.

In other words, stop blowing smoke up our tail pipes with half-baked, pull-it-out-of-the-air, stretch-marketing strategies. Give us a car that is affordable, gets at least 40 mpg in the city and still has a spare tire! And, come to think of it, throw in the inflator since it’s now considered such a great safety option.

Bob wrote on May 23, 2011 - 4:26pm Permalink
Frank, I completely agree getting rid of the spare may be too much of a cost to justify by the very small fuel savings obtained. From a "safety" standpoint, clearly having both the spare and the inflator is optimum. But getting rid of the spare does improve the trunk space. Mostly, though, I wanted to point out: You have it backward regarding fuel economy. Shedding 26 pounds has VERY little effect on the highway number, but would have a measurable effect on the city number. To my knowledge, GM has not stated how much this weight savings affects either fuel economy measure, but if they did, you would see it has a bigger impact on the city number than the highway number. As far as "what else can or should we shed?", I think you know the answer to that. Every day the automaker's job is to make these calculations regarding what the customers' priorities are for what equipment should be in every model at every price point. They DID throw out the center rear headrest. I'm sure that decision was also not without controversy.
RepublicanGirl wrote on May 23, 2011 - 8:22pm Permalink
Now that Ronald McDonald will have to retire because 'he' makes kids fat, maybe these thinner kids will offset the weight of such a safety feature (spare tire)?? Winning!
Anonymous wrote on June 7, 2011 - 3:31pm Permalink
Buying General Motors is its own punishment.
Merritt Hamilton wrote on June 29, 2011 - 2:07pm Permalink
High gas prices are the largest tax increase on the poor and middle class in existence today. It is a direct result of some sick plan to eliminate SUV's and get us all driving little crap-cans. If this nation had a solid energy policy that promoted a balanced approach to providing energy, one that outlines clear and concise short and long term goals, we'd be better off. However, sticking it to fossil fuel companies because you're controlled by the environmentalists will continue to make the middle class and poor even poorer.