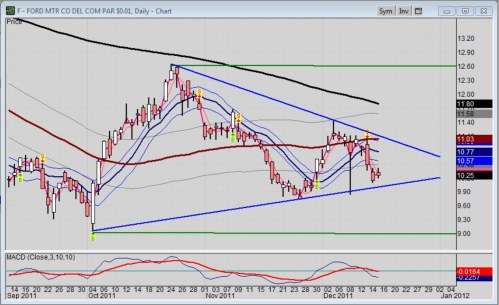 It does not come up all the time or on every stock, but when a converging wedge pattern appears on a stock chart, astute traders take notice; and such is the case with the stock for Ford Motor Company (NYSE: F).
Advertisement

Question is, will Ford stock break to the upside or to the downside? As an exercise, check out the daily chart of Ford stock to your right; and notice those two converging blue lines.

Despite having the Ford F-150 winning the coveted Motor Trend 2012 Truck of the Year award ( Read: In time for 2012 NAIAS, the Motor Trend 2012 Truck of the Year: Ford F-150 ), an achievement that now numbers 4-times since the award was invented, Ford stock has been down from its high in January of 18.97. And its low for the year is 9.05 which was achieved in October. And since neither has been broken, the 52-week mid-point is still at 14.01.

Something unique started in October, though. The low of 9.05 was followed a few weeks later with a swing high of 12.65. From there, follow the two converging blue lines that I have drawn. Again, note these two lines are converging.

For the record, these are short-term trend lines; one covers swing highs; the other covers swing lows. From a trading standpoint, this technical setup which is based on price dynamics defines a classic wedge pattern. It is showing a decrease in volatility, which often acts as a building event for future buying or selling pressure.

As a trader, I have witnessed this pattern on many occasions. In just about every occurrence, there was a breakout, because the converging price is building pressure. The bull and the bears are undecided on a direction for now; and at some point, one side will take over.

If you are bearish on Ford, then a breakout to lower levels may be expected. After all, Ford's stock price is still below its 150-day moving average of 11.80 (black line), much lower than the 12.82 level when I reported in October. So, Ford has been in a bear funk for some time now; but its fundamentals may not warrant this much bearishness.

If you are long-term bullish on Ford stock, then a quiet scenario like this is a great opportunity to bulk up on call options or sell puts for income while you wait for a breakout to higher ground.

Truth is, I do not know which way Ford will go. There are certainly a lot of heavy economic clouds overhead with Europe, and Ford will be negatively affected there. Furthermore, the Chinese tax on imports from US plants has Ford’s name on its list, no different than GM. And America's economy is not exactly the talk of the world; albeit better than many other countries.

Actually, charts enable you to devise a strategy, as they merely let you see the lay of the market price battlefield, so to speak. Regardless of your degree of bullishness or bearishness on Ford stock, this converging price pattern is indeed significant in terms of technical setup. It may take a month to work out; then again, maybe it’s less than that. However, a decision by the bulls and bears will define some kind of breakout.

What news will become the catalyst? I do not know that either. I know that frustrates some readers, but I learned a long time ago to let the market tell me what it’s doing; as I do not have that kind of power. It goes with trying to be humble before a market that is immensely larger than me.

How far might the stock move? Technicians like to use the distance from the pattern’s initial swing low or high followed by the level of which the price breakout passes the wedge line. In the case of Ford stock, we have the major swing high and low as potential targets. Furthermore, the 52-week midpoint of 14.01 is feasible; but that depends on who wins the battle within the wedge.

This is NOT a prediction; it is merely a chart assessment that has historical significance and a degree of repeatability. Again, I do not know which direction it will go. So, be sure to do your own assessment; perhaps check with your advisor on the perceived value and outlook of Ford stock for 2012. The wedge pattern is merely giving you an opportunity to devise an entry, long or short.

-----------------------
UPDATE 12-16-2011 to Full Disclosure: At time of publication, Sherosky, creator of the auto sector charts for TN, was neither long or short with the mentioned stocks or futures, though positions could change at any time. None of the information in this article constitutes a recommendation, but an assessment or opinion. However, on 12-16-2011, Frank put in an open order to be long the Mar 11 call options for his IRA, and the order was filled to take advantage of the NAIAS media coverage.