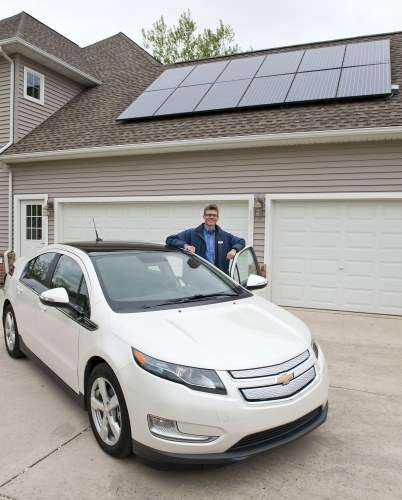 It was bound to happen eventually, a 2011 Chevrolet Volt plugged-in to a solar array. And Chevrolet is proud enough to tout the good news on its media page.
Advertisement

Two Chevy Volt owners were featured on media.gm.com today. One is from sunny Napa, California (no surprise), but the other is from Saline, Michigan where the weather is not as warm or the sky always as sunny.

According to the GM media release, Mark Hildebrandt developed an interest in clean energy in the 1970s. Over the years, it became his vocation – he owns a company that installs solar panels – so it’s only natural that he counts on the sun to create the electricity to charge his Chevrolet Volt.

"I made the switch to renewable energy a while ago, and thus with solar energy, I can power my house, charge my Volt and pump energy back into the grid, which I get credit for," said Hildebrandt, owner of Sunventrix in Saline, Mich., and one of the first Volt purchasers in the state.

Hildebrandt isn’t alone in harnessing the sun for battery power. ZD Wines' winemaster and CEO, Robert deLeuze, has run his Napa, Calif.-based winery exclusively on solar power since 2007, and today you can often find deLeuza’s Volt among the grape vines charging from the winery’s photovoltaic system.

“Solar power generation makes sense, and I think the Volt will help generate more interest in home installations” said deLeuze. “ZD Wines has had a solar power station for the past three years and purchasing my Volt was a driving factor in installing a solar photovoltaic system at my house.”

For the record, this is not a new concept in the minds of Chevrolet and GM engineers. The Detroit-Hamtramck assembly plant, home of the Volt, is already using sunlight to charge Volts before they are loaded for transport to dealerships. The plant has a 20kW Solar Carport that houses 10 Volt charging stations. Additional charging stations are planned for other locations around the plant.

The Volt’s extended-range capability offers a total driving range of up to 379 miles, based on EPA estimates. For the first 35 miles, the Volt can drive gas- and tailpipe emissions-free using a full charge of electricity stored in its 16-kWh lithium-ion battery. When the Volt’s battery runs low, a gas-powered engine/generator seamlessly operates to extend the driving range another 344 miles on a full tank.

As a retiree who has to watch the bottom line like everyone else, but still with a need for two cars, the 2011 Chevy Volt is looking more attractive all the time.

(Image Source: media.gm.com with photo by Steve Fecht for Chevrolet)

-----------------------
About the Reporter: After 39 years in the auto industry as a design engineer, Frank Sherosky now trades stocks, futures, and writes articles, books and ebooks via authorfrank.com, but may be contacted here by email: [email protected]