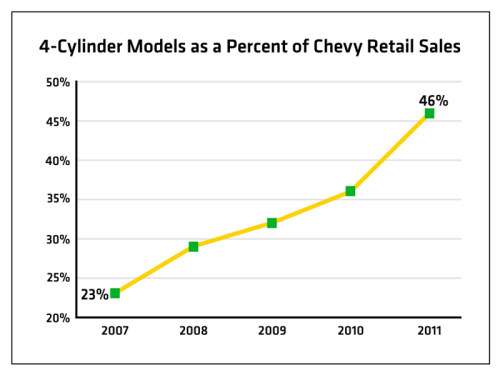 It’s official. Chevrolet sales stats prove consumers are indeed moving toward fuel-efficient 4-cylinder engines to save on their transporation budgets. Question is, what's next?
Advertisement

Consumer demand for fuel efficiency and advancements in engine technology have indeed moved four-cylinder models to the top of consumers' shopping lists.

Just look at the chart provided by Chevrolet and note the trend. If it was a stock, you'd have to buy and hold.

In 2007, four-cylinder models represented 23 percent of Chevrolet retail sales in the United States, less than either V-6 or V-8 equipped models. So far this year that number has increased to 46 percent, making fuel-efficient four-cylinder engines the top choice in the Chevrolet lineup.

“Chevrolet’s investment in advanced engine technology is reflected in the increased popularity of our four-cylinder models,” said Rick Scheidt, U.S. vice president, Chevrolet. “These technologies offer the performance and refinement drivers expect from Chevy in smaller engines that deliver the fuel efficiency they want.”

How long this will last is probably dependent on gasoline prices. Fact is, oil has risen for a multiple of reasons. Consider the Middle East unrest. Consider the pullback in American off-shore deep water drilling. Further consider that the Saudis have not exactly been honest in how much oil is actually left in their part of the ground; and the concept of having reached peak oil has been a given for decades.

Bottom line is, there’s no new oil being made these days. And what is being discovered is no longer easy to get.

According to the Chevrolet news release, customers are moving out of V-8 powered SUVs into V-6 powered crossovers like the Traverse, and from V-6 powered cars and crossovers into fuel-efficient four-cylinder models, such as Cruze, Malibu, and Equinox, he said.

The Cruze is available with turbocharged, Ecotec 1.4L four-cylinder engine that combines the fuel efficiency of a small engine with the power of a much larger engine when needed. The turbocharged engine delivers 138 horsepower and 148 pound feet of torque and up to 42 miles per gallon on the highway for Cruze Eco models – more than any other gasoline-powered car in the United States.

By comparison, the 2009 Chevrolet Cobalt XFE featured a larger 2.2 liter four-cylinder, with nearly identical output at 148 horsepower and 152 lb-ft of torque, but five fewer miles per gallon on the highway.

The 1.4L, turbocharged engine will also be used in the all-new Chevrolet Sonic, which will arrive at U.S. dealers this fall.

The Malibu features an Ecotec 2.4L four-cylinder engine, with variable valve timing that precisely adjusts the opening and closing of the engine valves to meet demand. The result improves performance and fuel economy for the Malibu, with 170 horsepower, 160 lb-ft of torque, and an EPA estimated 33 miles per gallon on the highway.

Variable valve timing is already featured on 12 Chevrolets, including the Camaro, Volt, Cruze and Silverado.

In the Equinox, the direct-injection 2.4L Ecotec is rated at 182 horsepower, and 172 lb.-ft. of torque, while delivering an EPA-estimated 32 mpg highway – more than any vehicle in its class, including the Ford Escape Hybrid. By comparison, the previous-generation 2008 Equinox had a 3.4L V-6 that delivered a comparable 185 horsepower and 210 lb.-ft. of torque with24 mpg highway.

Direct injection is also available on the Camaro V-6, the Equinox V-6, and the Traverse crossover.

What GM and the auto industry are still NOT doing

As reporter of engine technologies, I find GM’s approach no different than many other companies. Ford, for example, is using all three engine technologies for its own EcoBoost engines. Point is, there is nothing new under their sun; with more yet to be done to the internal conbustion engine and beyond.

Here is what I would like to see GM consider, if it ever wants to go to that next level. First, take the wraps off of its HCCI technology. The Homogeneous Compression Combustion Ignition method runs like a diesel but on gasoline.

Next, GM along with the rest of the world, needs to rethink the Otto cycle. Scuderi Group already has with its split cycle, which literally separates the cold intake and compression from the hotter power and exhaust segment of the cycle for greater efficiency more complete combustion. Furthermore, it enables a scalable air hybrid that would be comparable to anything hybridized via electric power. Add to that the hydraulic hybrid, and we have many options to curb our energy use besides expensive lithium-ion batteries.

And for trucks, the industry should consider creating dual fuel options so America can finally take advantage of natural gas as a transport fuel. Once that infrastructure is established, make that option available.

Ford has shown that it has been working with researchers in Liverpool, England to reinvent the spark plug with lasers. Imagine controlling the actual spark itself. Power and emissions would be even more managed.

Finally, we have come full circle as the steam engine is far from dead. Consider the Cyclone Power external combustion engine which will be proven this year as it attempts the break a land speed record. What’s crucial to our future here is that this same technology can be put into a car. So, let the tech race begin again!