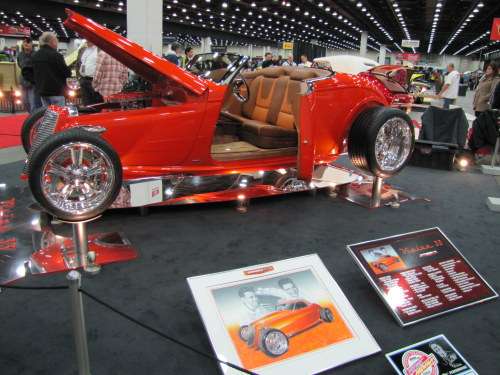 Last article had merely the gallery of the Pirelli Great 8 for 2012. Now we have the videos processed for your review, as well as visual points on what makes a Ridler Award contender in three key areas: creativity, engineering and workmanship.
Advertisement

The winner of the 2012 Ridler Award at the Detroit Autorama has been announced. So, now it is the public’s turn, not only to weigh in on the choice via the video review provided by TorqueNews, but to recognize what‘s required to win such a coveted trophy.

Recall the 60th anniversary of the Detroit Autorama held the largest-ever field of contenders for the Ridler Award. So, judges from the Michigan Hot Rod Association were very busy, literally crawling beneath the vehicles in order to narrow that field from the 63 contenders to the Pirelli Great 8 Finalists. And among those, only one can win the Ridler Award.

Also recall how the award emphasizes three elements as criteria for the judges; and this is your criteria as well as you view the videos:

I know its difficult simply by looking at videos, but we at TorqueNews.com welcome you to make your choice known in the comments area below. Question is, do you agree with the judges? If not, then which one would you have chosen?

As I promised last time, there would be more videos, and here they are in two parts, because of You Tube time limitations. Enjoy:

And for those who missed the Ridler winner, read 1955 Ford T-Bird wins the 2012 Ridler Award at Detroit Autorama. And stay tuned to TorqueNews for all your custom car show coverage.

For Some Former Daimler Managers Daimler Is Authority, While Tesla Is Like a Startup
How Daimler Unintentionally Subsidizes Tesla Giga Berlin
END_OF_DOCUMENT_TOKEN_TO_BE_REPLACED