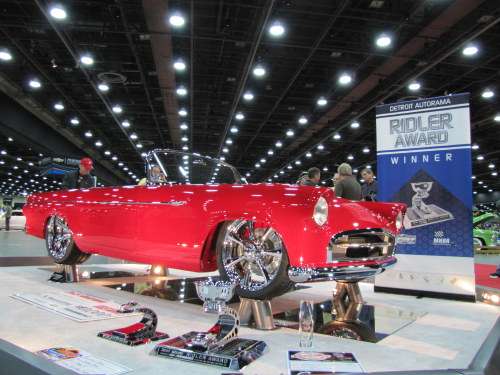 Feb. 26, 2012, a date that may only live in infamy until next year, has the Daytona 500 succumbing to rain; the Oscar hopefuls in high anxiety on the West coast; but the winner of the 2012 Detroit Autorama’s Ridler Award is for sure the red 1955 Ford T-Bird.
Advertisement

For sure, the winner of the 2012 Ridler Award, Dwayne Pearce of Tyler, Texas will remember this night at the Detroit Autorama for a mighty long time. And those who even made the Pirelli Great 8 will also remember it, and will forever be a member of that limited alumni.

As usual, the announcement did not have the flair on the floor where it should be, in this writer’s opinion. Instead, the committee meets in a large room upstairs or in the basement and makes the announcement, but not in a big way on the main floor. Then it trickles down to the rest of us on the main floor. That has to change and become more classy like the EyesOn Design award ceremonies at NAIAS.

Regardless, it’s hard to disagree with the decision of the judges. The 1955 Ford T-Bird in red looked flawless. The front grille held the original shape, but introduced a new, modern revision to it that seemed so natural. The undercarriage is so shiny and clean that we could have eaten off of it. And the interior was simple but clean, modern, yet stayed with the retro basic theme.

Be apprised, there were 63 vehicles at Cobo Center competing for the Ridler Award on this 60th anniversary of the Detroit Autorama. And once again the winner of the award had to meet the three elements as criteria for the judges:

Question up until tonight was, which of the Pirelli Great 8 best represented those three areas and made it worthy enough to win the coveted Ridler Award? And now it looks like the 1955 T-Bird met every one and then some.

So congratulations to the team of Dwayne Peace for a fine accomplishment! And here is my video of the events, including my video review of the vehicle as a Pirelli Great 8 Finalist.