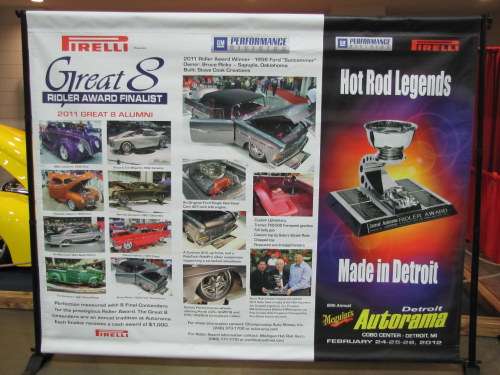 It all started with set-up night and a review by the judges to select the Pirelli Great 8 out of a field of 63 contenders. Now comes the crowds where the public gets the opportunity to view one of the largest indoor hot rod shows in America, but the Ridler Award will have to wait until Sunday night.
Advertisement

As you can see, articles may serve a purpose, but just don’t cut it, especially when it comes to custom cars. Whether it is EyesOn Design or the Detroit Autorama, there is nothing like being there at the show. It’s a visual thing, and videos are crucial. So goes this year’s 60th Anniversary for the Detroit Autorama capped off with the 49th Ridler Award on Sunday night.

While the judges did their thing on Thursday night, I had the honor of being invited by my friend, Ray, to cover the same set-up night, in other words tag along, with a separate group of auto enthusiasts and custom car builders. It’s almost like a trip to Mecca, but this time it’s Detroit, the Motor City, the hometown of the Detroit Red Wings, the Detroit Tigers and the Detroit Lions, not to mention the Detroit Pistons; but more important, the prestigious Pirelli Great 8 and the Ridler Award.

For sure the city is having its financial problems to say the least. However, when it comes to autos, the Detroit’s Cobo Center gets filled every time. Last month it was the 2012 North American International Auto Show which set a record crowd. This weekend it’s the Autorama to be followed in the next few months by the SAE World Congress.

Bottom line is, Detroit is busy doing what it always does in February: handling the cold and going to auto shows that are indoors.

Unfortunately, not everyone can attend; some are restricted by age or health. Not to worry, though. We have technology to help that situation. Here is my latest video which is basically a collage of photos in slideshow format along with a few videos. Hope you enjoy it.