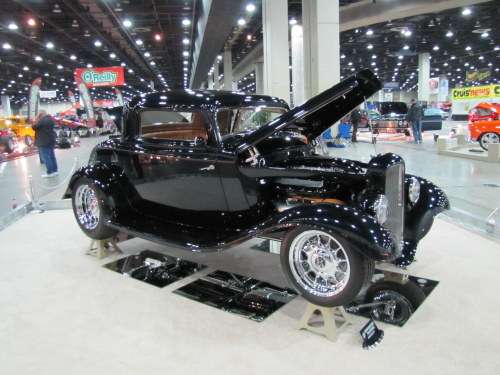 This 60th anniversary of the Detroit Autorama held the largest-ever field of contenders for the Ridler Award. Judges narrowed that field from 63 contenders to the Pirelli Great 8 finalists.
Advertisement

That made judging by the Michigan Hot Rod Association among 63 contenders for the Ridler Award no easy task, as the finalists, known as the Pirelli Great 8, were announced today at the 2012 Detroit Autorama.

Of course, I have my favorite (See the photo) but a red T-Bird also has a shot. Truth is, there are many factors that go into winning the Ridler Award; and not all of them can be seen from beyond the ropes. Judges get close and personal with every car. I will complete the gallery as soon as they are processed.

Be apprised, though, there are far more than just 63 vehicles at Cobo Center; the main floor is filled, including the lower level. Yet rest assured the 63 were surely deemed contenders by their owners as they rolled through the garage doors of Cobo Center. Then again, not every vehicle meets the requirements either; and that is the purpose of judges.

According to the show’s website, www.autorama.com, the award emphasizes three elements as criteria for the judges:
1. Creativity
2. Engineering
3. Workmanship.

And each year everyone is reminded that those who forget those three elements should not even bother participating. After all, only the vehicle that best represents those three areas will win the coveted Ridler Award.

In addition, there two hard and fast rules that all entries must meet. They are as follows:

1. The vehicle must make its first public showing at the Detroit Autorama. In other words, no other public shows. The only exposure allowed are those to develop interest or to gain sponsorship and which give credit to suppliers and/or sponsors, magazine and video build-up coverage is allowed. No articles, video footage or stories with photos of the vehicle in finished form will be allowed until after the award has been presented.

The Pirelli Great 8 field is made up of all styles and makes of cars. Although the listing is often late on the official Autorama website, here is the 2012 listing that was first made public to the web by streetroddersweb.com.

Congratulations to the Pirelli Great 8 finalists, as it is an honor just to be named.

TorqueNews will surely follow up on these as well as those that perhaps almost made the cut. And for sure we will be there Sunday night for the Ridler Award ceremonies. Stay tuned for more photo galleries and videos. In the meantime, read Detroit Autorama 2012 Setup Night: 1928 Packard Speedster and check out why I gave the 1928 Packard Speedster owned by Bob Schuman with the 2012 Detroit Autorama - TorqueNews Design Engineer Choice Award.

Peter E Datino III wrote on February 26, 2012 - 2:04pm Permalink
Entry 1800: 1932 Ford coupe is owned by my Grandfather Peter Datino. I am so proud of you PopPop. Good luck. I wish I was there with you, to see how happy and proud you must be. I love you and can't wait for you and our car to come home. Love, Petey
Storey wrote on February 26, 2012 - 4:46pm Permalink
David Emery's 32 ford is the best car for the riddler. The interior and the seats are one of a kind that has never been done before. The style flows throughout the car.