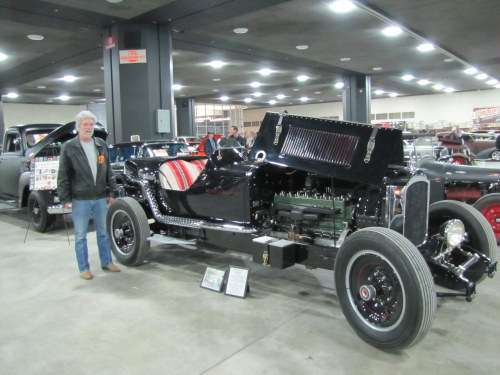 Cobo Center in Detroit was a busy hive during Thursday’s setup night with over 60 cars vying for the Ridler Award alone. Not all hot rods and custom cars qualify, though, but one stood out in the basement for its sheer design and extreme customization - the 1928 Packard Speedster owned by Bob Schuman.
Advertisement

There are many classifications of vehicles at the Detroit Autorama, and the 2012 show is no different. On the main floor, there is a host of rods, custom cars, high performance gems. On the lower level, though, a host of rat rods in various conditions and proportions appear and compete for their own set of trophies.

One area that has always stood the test of time is proper vehicle proportion. Not every car has it; and it is one of the key elements that I heard Bob Lutz speak to designers and design engineers a the GM design Studio many times.

Fact is, many restored cars merely use the proportions of the original vehicle. It takes greater vision to change that proportion to achieve the design goal.

Another fact is, the lower level displays at Cobo Center shows many rods that are in the middle of their proportional reformation, so to speak; and some will likely remain that way for years to come; others might never change. A few, however, get that extra attention and effort by their owners towards being finished or at least more refined, such as the 1928 Packard Speedster owned by Bob Schuman.

I might have missed this one if it had not been for my friend Ray Talley noticing that Bob Spilos was spending a considerable amount of time viewing the vehicle. Little did I know that Spilos knew the owner.

Still, anytime Spilos takes special notice that makes me want to take notice, too. After all, I have written about Bob’s own creations in past, one of which is called GearHeads and won the Gene Winfield Extreme Award two years ago in the very same lower level of Cobo Center. Read Remembering Autorama 2010 Award Winners in Detroit where the last photo in the gallery shows his hot rod, Gearheads.

I have great respect for Bob Spilos' ability as a car builder, especially for his talent to see and adapt other parts from other cars and somehow make them look like they belong; and now it seems I may have another car builder to consider. I consider it a unique talent.

And speaking of talent, back to the 1928 Packard Speedster, the owner is Bob Schuman who also owns what he calls a hobby shop in Mt. Clemens, Michigan, not that far from my home. I took three videos, but the one I favor most has the owner telling us about the creation in his own words; far better than me interpreting.

I especially liked how this vehicle was morphed from a sedan into a speedster; and all of that was in the owner’s head. And that’s how true custom rods are often built. It all starts with a base car, a vision followed by many hours of hard but enduring hours of labor of love.

There is a reason why I like to attend the setup nights. It gives me the opportunity to survey the cars before any awards like Pirelli Great 8 or Ridler Award is made. So, based on adaptability and engineering achievement alone, this reporter awards the 1928 Packard Speedster owned by Bob Schuman with the 2012 Detroit Autorama - TorqueNews Design Engineer Choice Award.