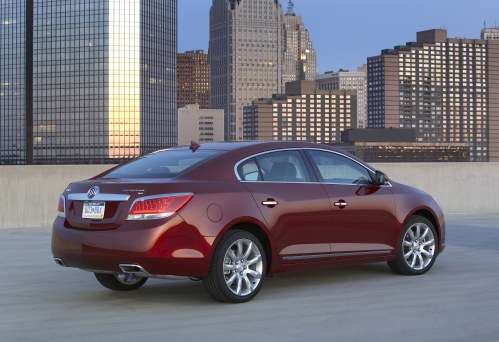 Few realize a five-star from the safety rating system is now more difficult to attain, because starting with 2011 models, NHTSA has introduced tougher tests and more rigorous requirements for its five-star ratings. The system now provides more information about safety feature performance and crash-avoidance technologies.

For your perusal, the National Highway Traffic Safety Administration’s New Car Assessment Program can be viewed on-line at www.SaferCar.gov

The 2011 Buick LaCrosse is shown in the New Car Assessment Program full frontal barrier impact test 35 mph, conducted at GM’s Milford Proving Ground. However, due to the large size of the videos, TN will only provide the link only to media.gm.com. See our Buick gallery for videos and pics.

The LaCrosse received five-star ratings for both the Overall Frontal Crash and Overall Side Crash. The ratings help consumers evaluate vehicle safety attributes when shopping for a new vehicle.

According to the GM news release, the LaCrosse offers the following safety features:
1) Intelligent technologies delivering a “360-degree” field of vision behind the steering wheel for a greater feeling of comfort, control and safety
2) Side blind zone alert technology notifying the driver if a vehicle in adjacent lanes is traveling in the driver’s blind spot
3) Rearview camera system featuring a display integrated into the navigation system screen 4) Front- and side-impact air bags as well as roof-mounted head-curtain air bags that help protect occupants in the event of a rollover crash
4) An advanced front-seat safety belt system including a dynamic locking latchplate, dual pretensioners that help tighten the safety belt for earlier restraint of the occupant during the onset of moderate to severe crashes; and load limiters that help limit the forces on the occupant to help reduce the risk of injury
5) GM’s StabiliTrak stability- and traction-control system
6) OnStar is included for the first year of ownership.

GM engineers especially developed the dynamic locking latch-plate, which is part of the front safety belt system. It locks under dynamic crash loading to help securely restrain the occupant’s pelvis, and it works in concert with the safety belt load limiting feature to control loads on the occupant’s upper torso. This safety feature helped the LaCrosse achieve the five-star frontal crash rating for both driver and front-seat passenger.

For the record, Buick is the fastest growing major brand in the U.S. and remains a best-selling brand in China, with continuing record growth. You may learn more about Buick cars and crossovers at www.buick.com, on Twitter @buick or at www.facebook.com/buick.

Surely, General Motors (NYSE: GM) hopes this kind of safety award will contribute to higher sales for Buick as well as a rise in GM’s stock price which recently fell below the $30 level, well below its IPO price of $33 and its actual IPO opening trade at $35.

The government also hopes for higher prices as it attempts to sell-off more of its holdings to rid itself of the “government motors” stigma.

Tesla Contemplates A New Strategy for China Retail even As Sales Boom
Jay Leno on Elon Musk & EVs: “I Think He Should Get ... Credit"
END_OF_DOCUMENT_TOKEN_TO_BE_REPLACED