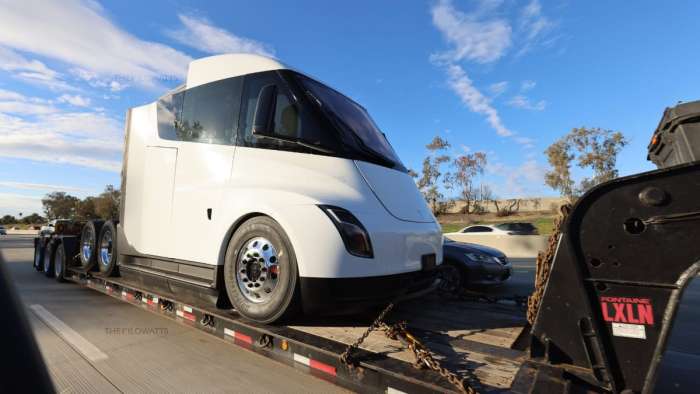 A new Tesla Semi prototype was spotted in California. The new truck has several changes to the design including the wraparound windshield which was one cause in Nikola's patent infringement case against Tesla.
Advertisement

New Tesla Semi images were shared by Tesla enthusiasts and YouTubers The Kilowatts, who were able to capture photos of the vehicle as it was being transported on a trailer. According to the members, the truck carrying the vehicle seemed to be heading towards Giga Nevada.

As we can see in the photos, the new Semi looks different compared to the vehicle Tesla showed off back at the unveiling.

The Tesla Semi in the picture has a new white paint job, updated design to the wrap-around windshield, side skirts, new door handles, smoked headlights, and updated taillights. Even though the pictures only show the exterior, the images suggest that Tesla has done some major changes to the Semi.

According to Elon Musk and Jerome Jullien (who was in charge of Tesla Semi development), the EV maker, even before bringing the semi to market, has been implementing changes to the class 8 truck. 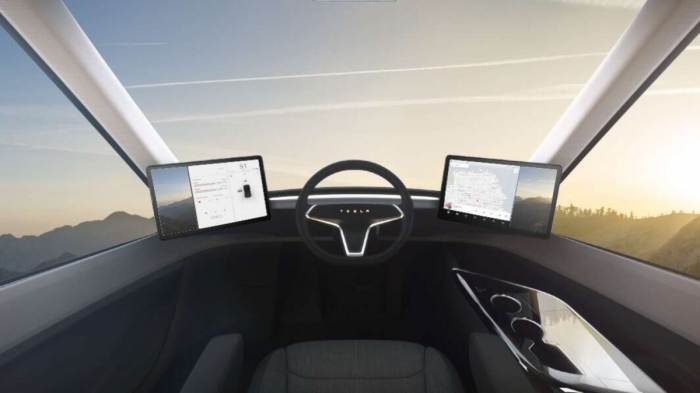 One of those changes increased the maximum range of the vehicle from 500 miles to over 600 miles. On top of that, Tesla has said the Semi’s design will be updated to comply with EU regulations which put a limit on cabin length of semi-trucks.

However, in April 2019 the EU adopted a new design directive allowing truck manufacturers to make the cabin of their vehicles up 90cm longer. This is meant to make the trucks more aerodynamic. The law basically made the design of the Tesla Semi the new normal.

Still, the truck Tesla showed off back in 2017 was an alpha prototype, and as is usual with Tesla vehicles, the EV maker institutes several changes to the prototypes before they come to market. And given the four years or so between the trucks unveiling and release date, there are sure to be some changes.

Some of the changes in the Tesla semi are, the vehicle no longer has one of its iconic features. Rather than the wrap-around windshield, which was a source of contention with Nikola, the Tesla Semi currently has a conventional windshield that ends at the A-pillar.

Related news: Tesla To Get EU Subsidy For Berlin Battery Plant, But It Might Not Matter

Back in May 2018, Nikola sued Tesla for infringing on its design patent claiming the Tesla Semi design was stolen from the Nikola One Hydrogen truck. In its suit, Nikola specifically pointed to the wraparound windscreen, the overall aerodynamic shape, and the mid-entry door as design ques stolen from Nikola.

Tesla following the lawsuit countered sued Nikola claiming Nikola stole the design of their truck from the Croatian supercar maker Rimac. Hindenburg alleged Nikola defrauded customers.
Nikola disputed the allegations. Hinderburg research put out a 60-page scathing report showing dozens of lies and misinformation the company put out to the public. The Hindenburg report ultimately led to Nikola’s chairman Trevor Milton losing his job. And the company is now under investigation from the Justice Department and the SEC.

The Nikola lawsuit also seems to be a case of patent trolling from a company with less than stellar ethical standards. However, Tesla might have decided, since the case is still being seen by the courts, to just change the vehicle’s design to avoid more problems down the line.

Besides the changes to the windshield, the windows of the recently spotted Semi also seems to extend further into the side of the vehicle, compared to the alpha prototypes that Tesla has shown off. The door handles which resembled that of the Model 3 and Model Y have now been replaced too. 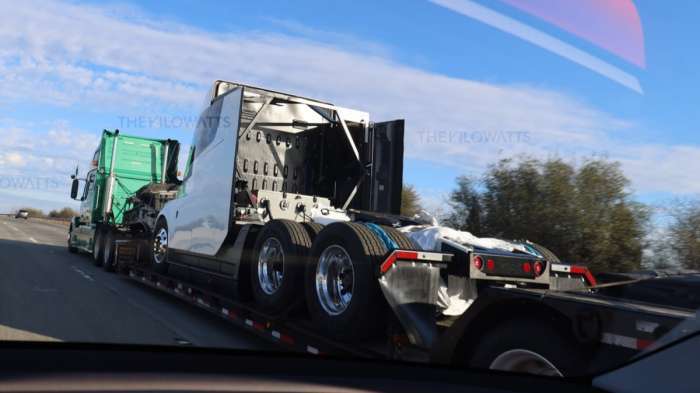 Elon Musk, in Tesla’s Q4 earnings call, said the company is ready to produce the Semi. However, at this point, given the amount of battery needed per truck, Tesla is delaying the production till the EV maker can better ramp battery cell production.

So do you like the new look of the Tesla Semi? Do you think the wrap-around windshield was replaced in connection to the lawsuit with Nikola? Let me know your thoughts down in the comments below.