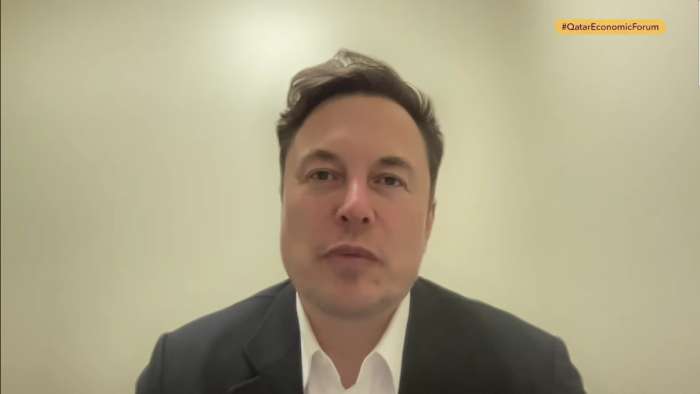 As Elon Musk's deal to buy Twitter approaches, there have been questions concerning what his role will be at the social media giant and, how that will affect his work at Tesla and SpaceX. And today, at his appearance at the Qatar Economic Forum, Musk answered those questions saying, he will take a similar role at Twitter as he currently has at Tesla & SpaceX.
Advertisement

Elon Musk is one of the busiest people on earth. Currently, he is the CEO of Tesla and the space exploration venture he founded, SpaceX. Musk is also involved in other companies he founded such as The Boring Company and Neuralink.

However, on top of his CEO role at two of his biggest companies, Musk is also the Chief Product Engineer at Tesla and the Chief Technology Officer at SpaceX. In his more engineering-focused roles, Musk goes into the weeds making major engineering and design decisions.

For example, Musk is credited as the brains behind the Cybertruck’s stainless steel exoskeleton body. At SpaceX Musk is also behind some pivotal engineering decisions such as transitioning the company’s rocket’s to use methane and changing the body of SpaceX’s upcoming rocket from carbon fiber to stainless steel.

However, if all this wasn’t enough Musk is also a father to 7 children and an overall culturally significant individual with several media appearances per month.

For most people, trying to fill Musk’s myriad roles would take several lifetimes. However, the serial entrepreneur has added another big project to his plate by announcing his intention to buy the social media platform, Twitter.

And since Musk announced his intention to buy Twitter, Tesla investors have been following the saga closely trying to figure out what kind of role he would take at the social media giant and if that will take away from his duties at the EV maker.

There have been speculations ranging from, he will not at all be involved in running Twitter, all the way to, he plans to take the leadership role of the social media company and run its daily activities.

Luckily, today we got a bit more clarification about Musk’s plans in his appearance at the Qatar Economic Forum. Musk was asked by the moderator if he plans to be the CEO of Twitter, and if he does, would he still keep being CEO of Tesla and SpaceX.

In his answer, Musk did not outright confirm that he will be the CEO of Twitter however, from his description, it appears that he intends to be as involved at Twitter as he is at Tesla and SpaceX.

To begin with, Musk does not like the “CEO” title. And even though everyone calls him the CEO of Tesla, last year through an official filing with the SEC, Musk has eliminated the CEO title at Tesla, and currently, Musk’s official role at the EV maker is Technoking of Tesla.

When you take this into account, it’s not at all surprising Musk did not outright say he will be Twitter’s CEO, however, from his description, he makes it clear that he will be taking a similar role at the social media giant as he does at Tesla and SpaceX.

Musk has previously said that every good minute he spends thinking about Tesla translates to a million dollars. And given this fact, Musk taking a very hands-on role at Twitter will undoubtedly disappoint Tesla investors.

Having said that, as of now, it’s impossible to predict how Musk’s role at Twitter will affect his work at Tesla. However, we will be sure to keep you posted as we learn more about Musk’s plans.

So what do you think? Do you support Musk’s decision to drive the product and technology at Twitter? Also, do you think that will negatively affect his work at Tesla? Let me know your thoughts in the comments below.