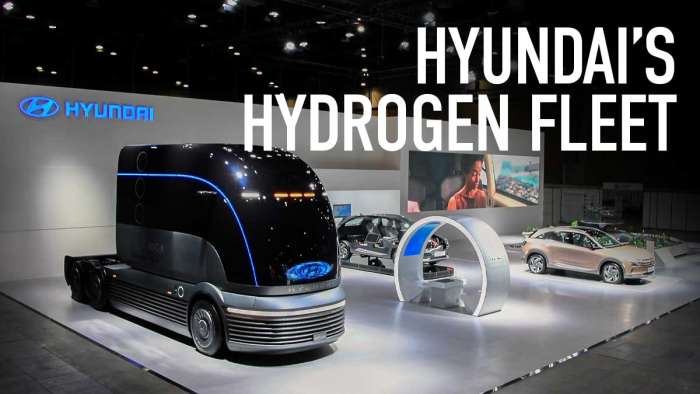 Hyundai unveiled its latest Hydrogen technology and products at an Energy Show in Korea. Hyundai Motor Company is determined to prove its hydrogen mobility leadership.
Advertisement

We know Hyundai and Kia are serious about being the top EV manufacturers by 2025. Well, Hyundai just showed us an array of vehicles and technology that proves to us Hyundai is also serious about Hydrogen technology. 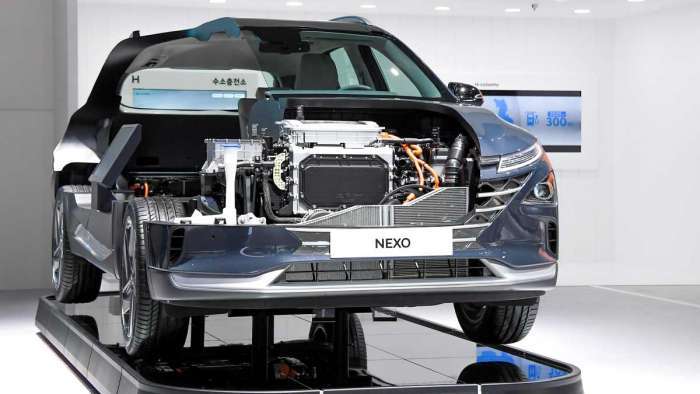 I guess we shouldn’t be surprised as Hyundai created the first hydrogen fuel-cell crossover. Because this $60,000 Hyundai Nexo crossover is a one of a kind, the closest competitors are hydrogen sedans like the Honda Clarity and Toyota Mirai. All of these cars are very impressive, but we all know these cars are limited to the California market and are far too expensive to justify. It’s still cool to know you can buy hydrogen fuel-cell vehicles.

In Korea, one of the first vehicles Hyundai released at the H2 Mobility + Energy Show is the hydrogen-powered Class 8 heavy-duty semi-truck. This massive truck is known as the HDC-6 Neptune. Yes, a fitting aquatic name for this planet-sized hydrogen-powered semi.

This new hydrogen semi-truck looks nearly production-ready and would give Tesla a run for its money. People have so much faith in Tesla because they are developing an infrastructure to help make EVs more mainstream. Hyundai is also making moves with infrastructure to make hydrogen technology accessible to more people. 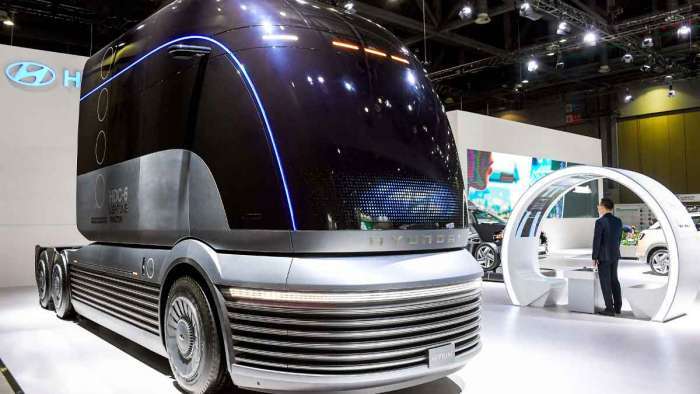 Hyundai plans to expand its leadership in hydrogen vehicles by starting in the commercial vehicle market; hence, the HDC-6 Neptune. This truck was inspired by the streamliner railway trains of the 1930s, and I think it is brilliant that Hyundai is going after the commercial market. Our everyday vehicles keep going through stringent government regulations, which led to the demise of V8s and manual transmissions. Commercial vehicles create far more pollution than all the personal cars in America and genuinely need to get regulated or even better, zero pollution like what Hyundai aims for with the HDC-6 Neptune.

Hyundai works with various organizations, public/private sectors, and governments to help solidify Hyundai’s place in hydrogen mobility leadership. These moves in infrastructure will push Hyundai to be a leader in Hydrogen tech, much like how Tesla became an EV leader.

A partnership between Hyundai and Cummins got formed to help provide hydrogen fuel cell systems for the North American commercial vehicle market. Hyundai’s commitment to establishing relationships with organizations, government officials, and now Cummins, shows the determination and belief Hyundai has for a hydrogen fuel cell future. Additionally, Hyundai accelerates entry into the European hydrogen heavy-duty truck market with XCIENT and will get done through a joint venture with Swiss company H2 Energy. One last bit of commitment from Hyundai included signing a Memorandum of Understanding (MOU) with the US Energy Department. Why? This was a pledge to share Hyundai’s expertise in the field and proof data of hydrogen energy’s competitiveness. 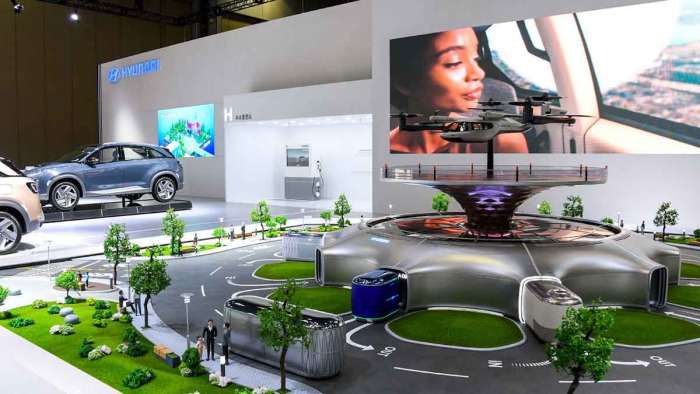 Finally, Hyundai did unveil a more pragmatic piece of hydrogen fuel cell tech that we can use today, unlike some hydrogen-powered commercial trucks. This new technology is a hydrogen fuel-cell generator to replace diesel generators. This generator will use two fuel cell stacks used in the Hyundai Nexo. The generator can be used for many different applications like to charge two EVs at the same time or to charge electric buses/trucks. Hyundai’s mobile fuel cell generator is another step to a cleaner future.

Hyundai has released a lot of information and products to prove its commitment to hydrogen fuel-cell technology. I think this is some of the most important news to come out as it has the potential to affect the consumer directly. Commercial vehicles have been the cause of insane pollution, but nobody cared, and no government regulations were put in place, at least in the States. If Hyundai can create a future of zero-carbon emission in the commercial segment, perhaps the ridiculous laws set on passenger vehicles can be ceased.

So many great cars have got ruined due to regulations. V8s have got replaced with soulless twin-turbo V6 engines or turbo four cylinders, which sound like vacuums and aren’t even efficient in the real world. Maybe Hyundai can single-handedly save passenger cars while creating a greener future.

DeanMcManis wrote on July 6, 2020 - 12:37am Permalink
Nice article Kevin. I shared it on Facebook. The Semi looks cool. Like a cross between a 50's Detroit concept truck, and an Artemus lunar base vehicle.
Kevin wrote on July 6, 2020 - 11:34am Permalink
Really appreciate that my friend, and yes I certainly agree, the hydrogen fuel-cell semi Hyundai produced looks great. I'm excited for Hyundais future and how far its efforts will go. Thanks again for stopping by.