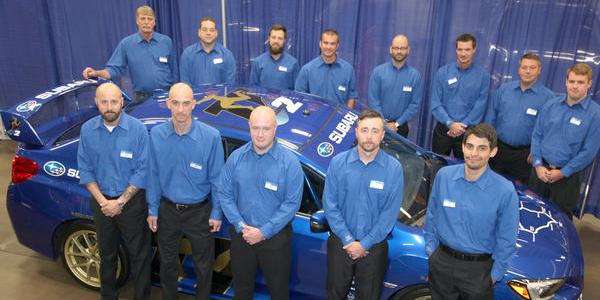 Is Your Subaru Mechanic One of the Best in the Country? Check out the Top Techs Here

Just how highly trained is your Subaru mechanic? Is yours on the top tech list?
Advertisement

Subaru just announced the winner of the 2016 National Technician Competition. What does it mean when you take your Forester, Outback, Crosstrek or WRX/STI in for Service?

Subaru holds a special competition for their service technicians every year that gives you insight into the service department were you get your Subaru serviced. What is it? It’s a biennial event featuring Subaru technicians from across the country testing technical knowledge, skill and on-the-job excellence in a combination of written, diagnostic and hands-on challenges.

It shows how serious Subaru is about having highly-trained service technicians. There are competitions from every Zone in the US, and 13 of the Zone Champions competed for the top spot.

Seth DeGraff of Capitaland Subaru in Glenville, NY was awarded top honors in this year’s competition. Subaru Corporation in Japan even holds these competitions globally for Subaru techs worldwide. The top winners get to go to the top motorsports events and work on Subaru’s WRX STI rally cars and Nurburgring 24-hour car. For winning the US competition, DeGraff will receive an all-expenses paid trip to compete at the Subaru World Technical Competition in Japan.

Is your Subaru Tech on the top finals list?

Zone Champions and runners up (in alphabetical order)

Subaru really does take pride in having the top service technicians working on your Subaru Forester SUV, Outback wagon, Crosstrek crossover, Impreza compact, Legacy sedan, BRZ sports coupe and WRX STI performance car. They make the investment so you can have the best Subaru mechanics working on your car.