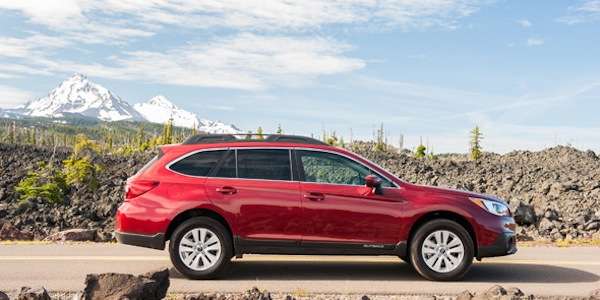 With the launch of the new 2015 Outback wagon, Subaru wants their customers to experience the outdoors for free. Is it just corny or calculated?
Advertisement

As Subaru launches the 2015 Outback crossover, the Japanese automaker has created a niche market. Why is it aimed squarely at adventure seekers? It’s a brilliant plan that has been working for more than five decades now. Although, Subaru didn’t start out making all-wheel-drive multi-purpose vehicles like the 2015 Outback. Fuji Heavy, parent company of Subaru, started by making a tiny car for the Japanese market called the Subaru 360.

Subaru began domestic production in 1958 at its then Gunma Isesaki Plant with the Subaru 360 minicar. Subaru ended the Mini-vehicle production in 2012 with total vehicle production of 7,967, 801.Today, Subaru is selling their multi-use vehicles all over the globe and have created a niche market with their all-wheel-drive SUV’s and crossovers. Subaru has created a loyal following of people who lead active lifestyles. Here is the U.S., with the launch of the new-generation 2015 Outback wagon, Subaru is encouraging people to have more off-road fun.

What is Subaru promoting?

Subaru built one of the first mass-produced all-wheel-drive passenger cars in America. The DL Wagon was the forerunner for the Subaru Outback which is now the flagship for the brand. Now, Subaru attracts a new generation who lead active lifestyles and love the outdoors. Alan Bethke, vice president of marketing, Subaru of America, Inc says, “Many Subaru owners enjoy the outdoors and support environmental conservation and so we want to encourage more people to visit America’s national parks to fully experience the great outdoors.”

Subaru knows that a young millennial generation wants to get involved in their communities by serving. Subaru is a company, known for its commitment to community service and is also encouraging their dealers across the country to volunteer at national parks to show their support for their local area. To show how committed they are, Subaru has partnered with the National Park Foundation since 2013 and donated more than $1.4 million through its annual “Share the Love” campaign.

Subaru created a niche market aimed squarely at adventure seekers and it’s working well for the brand. They are involved in causes that are important to their customers. As the new 2015 Subaru Outback launches, they are encouraging people to have more off-road fun for free at America’s national parks during the upcoming “fee-free day” on September 27, 2014. It’s a brilliant way to promote their recreational-purposed vehicles.