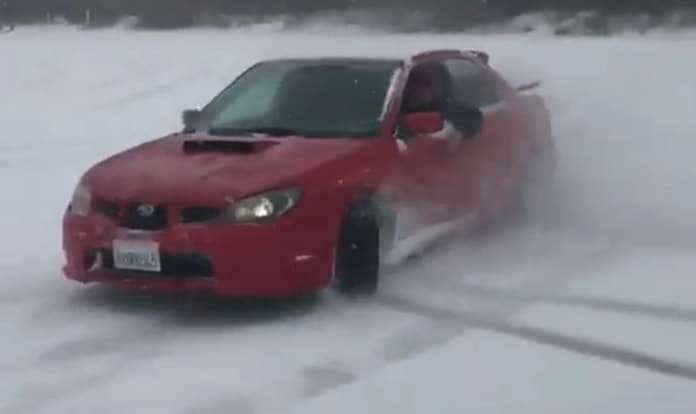 We reported last week how Ansel Egort acquired the Red 2006 Subaru WRX STI from the film ‘Baby Driver’. Now he’s taking his performance-tuned WRX STI out in the winter storm “Bomb Cyclone” slamming the Northeast. It’s what Subaru owners do when they have an all-wheel-drive performance car, and Egort can now be considered an official Subaru owner.

Ansel Elgort put out a tweet on his Twitter page @AnselElgort on January 4 with the short clip. He’s having fun in the snow-covered parking lot near where he lives in New York City. According to the New York Times, the storm kept most people off the streets, but not this Subaru owner.

Nyc snowstorm no worries baby will give u a ridepic.twitter.com/oUyVi787BH

Elgort wanted the Subaru WRX STI from “Baby Driver” so bad, he asked the producers for six months if he could have it. He even said he would buy the modified Subaru performance car from them. “It’s a Subaru WRX STI, it’s the one from the opening scene,” the 23-year-old actor told Seth. “I just kept begging them for it to let me have it.”

Now that he does have it, it’s not sitting in the garage during one of the worst storms to hit the Northeast. The 2006 Subaru WRX STI from the film was a stock 2006 WRX STI with the rear wing removed. Three other Subaru WRX were used to make the film, one was a modified WRX with over 320hp and other powertrain upgrades, another was an automatic transmission model with a camera on top, and another was a WRX converted to RWD.

This WRX STI from the opening scene, is a sleeper with the rear wing removed. Elgort can drive through the streets of NY City somewhat undetected. Subaru uses a special all-wheel-drive system on the WRX STI that is perfect for drifting in the snow, and Elgort already seems to have mastered driving the WRX STI in the extreme conditions.

John Goreham wrote on January 8, 2018 - 7:01pm Permalink
That's cool. I think the WRX in the opening scene had the regular WRX wing, not just a removed STI higher wing. Watch a trailer and you can see it clearly when the trio heading into the bank open the trunk to get the weapon bags. It becomes important when the helicopter is watching from above near the end of the first chase.