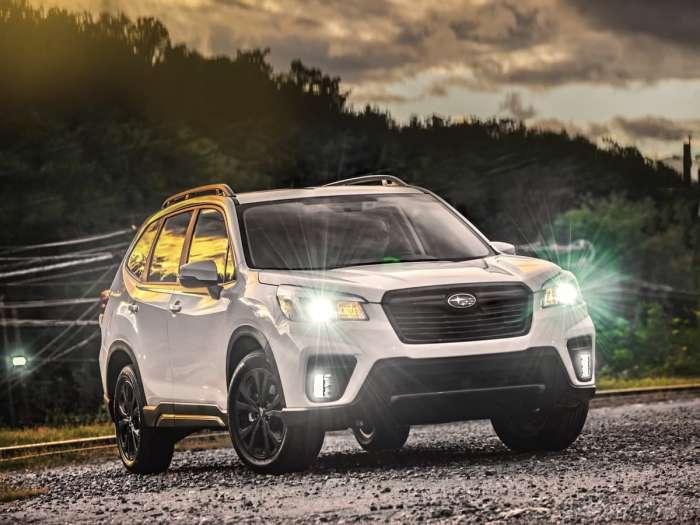 Forester fans are wondering why Subaru Corp doesn’t offer more new Crosstrek colors like Cool Gray Khaki or Sunshine Orange for the new fifth-generation 2019 Forester. The two colors are popular with a younger generation of customers and are going over big. Subaru knows the Forester attracts an older demographic so the Japanese must think they won’t buy them. Jasper Green Metallic, Horizon Blue Pearl and Crimson Red Pearl are the only new colors the new Forester SUV gets for 2019, and they aren't proving to be popular with customers.

The all-new 2019 Subaru Forester is already being pre-ordered in Japan and Subaru Corp released what colors customers are ordering the new Advance e-Boxer Hybrid being offered in Japan, Australia, and likely Europe. In the home country where Forester is produced, 55 percent of customers are getting boring white or black.

Subaru reports 38 percent of all new Forester Advance models will be Crystal White Pearl and 17 percent are being ordered in Crystal Black Silica. Ice Silver Metallic and Horizon Blue Pearl are next at 9 percent, Dark Gray Metallic, and Dark Blue Metallic 6 percent, and Sepia Bronze, Jasper Green and Crimson Red Pearl are at 5 percent of customer orders.

Subaru doesn’t foresee a drop in new 2019 Forester sales around the globe and expects an increase in sales because of the new-generation changes. Their flagship model doesn't come in any cool new exterior colors, but it gets improved safety technology, comes with more passenger room inside, more cargo room, and keeps its excellent outward visibility. It’s a formula the brand isn’t willing to mess with.

Subaru Corporation is still a conservative automaker and Forester is the number one selling nameplate around the globe. They didn’t give it wild exterior styling changes, and they aren’t giving it any cool new exterior colors either. At least in Japan, 55 percent of new 2019 Forester customers like boring white and black.

DeanMcManis wrote on September 27, 2018 - 11:02am Permalink
Given the car's conservative and drab styling, it's no surprise that they aren't offering wild, youth-inspired colors or trims. Subaru is still too small to alienate their traditional buyers, and white and silver are the most common colors. I still think that if Subaru came out with their VIZIV concept design, and/or made something wild like a new Brat then they would continue the attention grabbing momentum with some daring colors. Playing it safe has served Subaru fairly well, but I would also like to see them move forward with EV and sport models. Hyundai and Honda have been more bold with their designs and colors and their increased sales have rewarded their efforts.
VC wrote on August 9, 2019 - 12:14pm Permalink
I just purchased a 2019 Forester in the JASPER GREEN ! I have only gotten positive feedback about the color. Many people commenting say they have never seen that color before and like it. Advantage to the Jasper Green: only one in the parking lot and easy to find, I think it has a masculine look to it, and it's unique ! So far - "I'm lovin it"
Barb Shubert wrote on August 28, 2019 - 8:12pm Permalink
I am excited to order a 2020 in Dark Blue Pearl. I have been trying to research colors and make sure this color will still be available. No luck so far.
Katy wrote on December 29, 2019 - 6:46pm Permalink
I was planning to trade up from my 2018 to a 2019 or 2020, but couldn't stand the color selection! I really loved my 2018 Jasmine green however, r as previous commenter said everyone seems to like it too, but I found...Jasmine not Jasper far more appealing to my sensibilities. I thought the Jasper was just garish by contrast. I think the Jasmine just looks classy so guess I'll be keeping it until I can find another one I like as well.
Yolanda Terry Parks wrote on March 27, 2020 - 12:11pm Permalink
I am 73 years old woman and I think most Subaru Forester colors are boring. Also, I live in Arizona where leather seats or a seat warmer isn't necessary. My current Subaru, 2003 Baja, was purchased in 2005. It had been the dealership courtesy car in Mustard Yellow with only 144 miles. Today most cars look alike. From 50 ft or more you can'at tell if the car is a Porsche or Buick. I never have trouble finding my car in a parking lot. Subaru is a great car, but, at my age why should I pay (with my hard earned money) for a car with so few choices. It's supposed to be my car..... not a Subaru fleet car.
Kathy Glaser wrote on April 19, 2020 - 10:50pm Permalink
I love purple, or orchid, plum. They would be spectacular colors for newer Subaru forester
Grace califano wrote on April 28, 2020 - 11:41pm Permalink
Who picks the colors for the 2020 subaru forester? What happened to the beautiful champagne color from 2014? Or the jasmine from 2017. The new colors are not appealing at all.