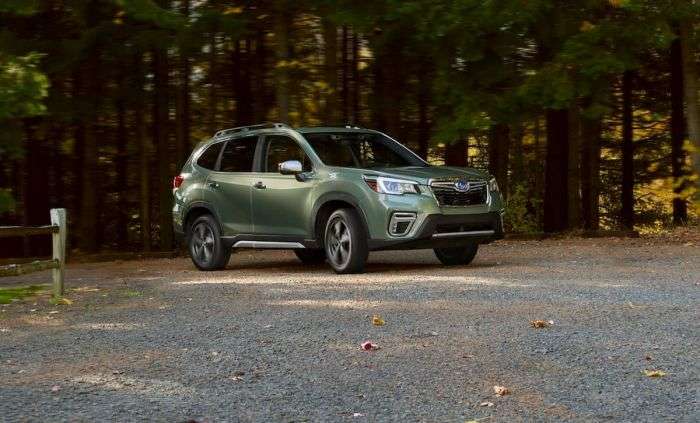 Fans are disappointed in the new 2019 Subaru Forester styling. Why did Subaru opt for plain and boring?
Advertisement

Subaru launches the all-new fifth-generation 2019 Forester SUV this fall but it’s not what fans were expecting. The new 2019 Subaru Forester didn’t get much in the way of exterior design changes and it looks a lot like the previous generation model. Why didn’t Subaru bring bigger changes to Forester on the outside?

According to a report from Forbes, Subaru didn’t want to “confuse or disappoint the market” with their top-selling model around the globe. The report says Subaru Corporation opted for what it calls a "keep-concept" idea. What this means for consumers is, the Japanese automaker wants to keep Forester’s design language similar to the fourth-generation model that launched in 2014.

Where Subaru decided to spend their Research and Development budget on is new safety technology like EyeSight and the new DriverFocus with facial recognition. Subaru has a goal to be the overall safety leader, and Forester is their flagship model for the new technology around the globe. Forester is the number two-seeping vehicle in the U.S., but the compact SUV is their number-one selling vehicle globally.

Subaru doesn’t want to mess with the success they’ve had with Forester with its boxy greenhouse styling mainly because of its excellent visibility and cargo-carrying ability. When Toyota changed the styling of the RAV4 the raked roofline cut down visibility, rear headroom, and cargo room considerably. Excellent outward visibility is one on the core values the brand is not willing to sacrifice for improved styling.

As for dropping the sportier Forester 2.0XT turbocharged model and coming out with the 2019 Forester Sport, according to Subaru, only 5 percent of buyers were opting for the turbo model, so it was not a profitable model to keep building. Subaru Corp decided to ax the 6-speed manual gearbox for the same reason; slow sales.

The new fifth-generation 2019 Subaru Forester gets a complete remodel underneath the boring exterior skin. The big changes come underneath as Forester grows with its wheelbase increased to 105.1 in. from 103.9 inches. This translates to gains in rear, legroom, headroom, hip and shoulder room. Subaru says the doors have wider openings making ingress/egress and installing a child seat easier.

The Forester re-design also increases cargo space to 76.1 cubic ft. with the 60:40 split rear seatbacks lowered, a gain of 1.4 cubic ft. Forester's rear gate opening width is now 51.2-in. wide, a 5.3-in. increase over the previous model and up to 8-in. wider than on some competitive SUVs. The load floor sits flatter, and the cargo area’s squared-off shape has been further optimized for ease of carrying large objects.

Subaru Corp doesn’t foresee a drop in new 2019 Forester sales around the globe and expects an increase in sales because of the changes. Their flagship model gets improved safety technology, comes with more passenger room inside, more cargo room, and keeps its excellent outward visibility. It’s a formula the brand isn’t willing to mess with.

Ed B wrote on May 10, 2018 - 8:30am Permalink
Great article Denis. I get it, but no one called for a radical exterior redesign. The car just looks too much like the 4th gen, other than the tail lights. Subaru could have hit this out of the park with subtle exterior changes to match the transformational interior and global platform changes. The Crosstrek is a great example, other than lack of power the material changes from the previous version were welcomed (as we can see by the sales numbers). Lastly, why opt for the Forester Limited when there is no distinction in power (or the Sport). The only plus in the Limited is the Driverfocus system - I suspect only 5-10% will pay a premium price for that option. Subaru is getting too comfortable in its own skin, but again - it's all about the sales right?
Skierk2 wrote on May 10, 2018 - 11:03pm Permalink
Currently own a 2007 RAV4 V6, and I like the power and torque of that 235 hp engine in the mountains of Utah Almost purchased a 2017 Forester XT, because of the 250 hp turbo, but decided to hold off for the new design in 2019. Unfortunately, the turbo is now gone. Does not Subaru understand, they have just lost 5% of their sales???
Ed B wrote on May 11, 2018 - 10:27am Permalink
Skierk2 - They don't care, based on their comments they only sold roughly 80 or so XT's per month and it wasn't cost effective to continue the line. So, for 2019 - they took the "one engine fits all" approach and the bean counters won the day. So, if you're an enthusiast - the brand is moving away from you, unless you opt for an Ascent and probably the 2020 Outback will have the new 2.4L turbo (from the Ascent). The 3.6R H6 option will be gone in the Outback. So, if you have a "need for speed". Subaru may not be the carline for you in the future. They're hoping safety and fuel economy trump aesthetics. We shall see.
Paul wrote on May 22, 2018 - 1:33am Permalink
And gained much more.
Big Engines wrote on May 11, 2018 - 9:47am Permalink
Well, According to a Japanese source that i read, Subaru will set Subaru Forester with "Turbo" later! the website i read that Subaru didn't set Turbo in the new Forester cause they want to put new generation Turbo Engine, that mostly likely from the new WRX! which i read there maybe one of two engines! the first one maybe 2.0L Turbo that different from the previous generation, the another engine is 1.8L Turbo engine! which are the previous rumors that talk about Subaru's intention to downsize turbo engines from 1.6L turbo to 1.5L turbo and 2.0L turbo to 1.8L turbo, so mostly we will find out about this in 2020 cause the new engines will not come out until 2020 with the new generations cars as like Legacy, Outback. WRX, WRX STI, so i think the Forester turbo will share the turbo engine with the new WRX.
Ed B wrote on May 11, 2018 - 10:31am Permalink
Big Engine - you may be correct, but that may be some time down the road, if the turbo XT makes it back to the states. Remember, the Japanese market is different and STI is more popular there and it was where all Foresters and variations like the TS Forester were made. The U.S. market is calculating that it can flourish without a turbo version - we shall see.
Richard Joash Tan wrote on May 11, 2018 - 12:52pm Permalink
There is also the TS version of the 4th generation Forester. I am hoping that the XT will be replaced by the STI Sport version in the near future.
Big Engines wrote on May 13, 2018 - 4:42am Permalink
yes Ed B, i know about the variations for the Forester in japan but i wish the turbo is not just for japan cause if Subaru make the Forester just for japan it's really stupid move! i believe the sales of Forester Turbo will be much higher in USA than Japan, but this more will make many fans of Forester leave the Forester cause they want the Turbo engine and switch to higher category like Outback or Ascent, to me if i don't find Forester Turbo i will go to Ascent much better look and more powerful and much luxury from the most Subaru cars, not interested for Outback cause it's more like all terrain Wagon not real crossover, i believe the sales of Forester 2019 will be less than 2018 if the Turbo is gone for ever, really upset why care about Legacy have bigger/stronger engine like 3.6L 6H or new turbo engine from the Ascent even it's much less sales from the Forester but have option for bigger engine?!
So late to posr wrote on January 26, 2019 - 10:39pm Permalink
I am so late to this post, came from a link about how Subaru thinks it's customers care more about style than performance. So disappointing. The comments on the webs generally agree, more power needed. But seems like only 5% of Subaru customers read about Subaru. As a past WRX, current Legacy GT owner (both with manual selectors), it totally breaks my heart. I prefer a zippy car, and the combo Subaru offers (4 doors, all-wheel drive, turbo) is only offered on few models. But because I keep cars for many years (10+), they will likely have nothing for me. Would totally buy a top of the line Legacy GT in about 3-5 years when my current on is gone. Used Audi, I guess. And who are these dorks that don't want performance?