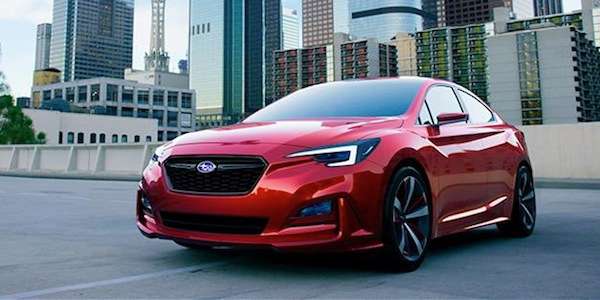 The 2017 Impreza is the first of a new-generation of Subaru vehicles. What’s coming in the near future?
Advertisement

The Subaru Impreza Sedan Concept unveiled at the LA Auto Show this week is the second Impreza compact concept car following the Impreza 5-Door hatch that was unveiled at the Tokyo Motor Show. It had a similar design theme that Subaru will start producing with the 2017 Impreza production car. That car will now be produced in the U.S. for the first time at the Subaru of Indiana plant in Lafayette starting next year.

The Sedan Concept is a hint of the new design direction for the brands entire lineup. It’s all part of Subaru’s next-generation strategic vehicles envisioned in manufacturer Fuji Heavy Industries Mid-Term Management Vision "Prominence 2020", announced in May 2014.

The Impreza compact is the entry model in Subaru’s all-wheel-drive lineup and it looks like Subaru will go after the competitive compact sedan market in a bigger way. Currently, Subaru sells around 80 percent Impreza hatchbacks and 20 percent Impreza sedans in the U.S. They plan to steal more compact sedan buyers away from Toyota Corolla, Honda Civic, Ford Focus and Hyundai Elantra.

While the production Impreza won’t look exactly like the Sedan and 5-Door show cars, we can get a good idea of what Subaru has in mind for the new-generation lineup. The Impreza show car has a wide and low stance, “hawk-eye” headlights and a prominent character line that runs from the front fender down the body and to the rear. The rear of the car has a more muscular look than the current model.

Subaru’s LA show car has a wheelbase of 105.1 inches, which is about an inch longer than the current model, and with a length of 179.3 inches, it’s almost an inch shorter. The width of 70 inches is 1.5 inches more than today’s four-door production car. The height is unchanged at 57 inches. With its new character lines, the new 2017 Impreza will improve its aerodynamic performance.

The Ruby Red Metallic exterior color shouts sporty and fun-to-drive which are core values for Subaru in their entire lineup. There are some things that Subaru won’t be changing for the next-generation of Subaru all-wheel-drive cars. Look for the new 2017 Subaru Impreza to be built here in the U.S. late 2016. Stay tuned.