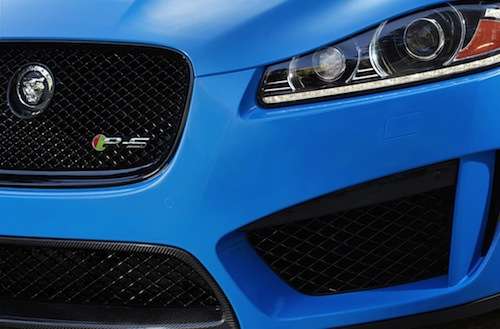 The fastest most powerful Jaguar ever built, the XFR-S, will make its world debut in LA along with the 2013 Range Rover and Jaguar F-TYPE.
Advertisement

Jaguar Land Rover will be making a big splash at the 2012 Los Angeles Auto Show by bringing three new “breakthrough” products. The ultra-high-performance Jaguar XFR-S is the fastest and most powerful car Jaguar has ever produced and it will make its world debut at the show later this month. Two other important vehicles in the Jaguar Land Rover lineup will also make debuts, the all-new two-seat sports car, the Jaguar F-TYPE, makes its U.S. auto show debut in Black Pack trim. And the world's first all-aluminum SUV, the 2013 Range Rover makes its U.S. auto show debut.

The Los Angeles Auto Show is an important event for the British automaker because the U.S. will be the world’s largest market for the three automobiles. Jaguar Land Rover is counting on U.S. sales of the two sports cars and the aluminum SUV to account for a large number of sales. The British automaker has put extensive time and money into developing the three new products and the LA Auto Show will be the most important of the year.

"This year's Los Angeles Auto show is one of the most significant U.S. shows in years for Jaguar Land Rover as we introduce three breakthrough new products," said Jaguar Land Rover North America President, Andy Goss. "Jaguar Land Rover is making major strides to grow the business with highly targeted new products.  The new Jaguar F-TYPE, Jaguar XFR-S and all new Range Rover will all make a major impact, specifically in the United States, which will be the world's largest market for all three vehicles."

The all-new ultra-high-performance Jaguar XFR-S model will be making its global debut at the show and is the fastest and most powerful car Jaguar has ever produced. Jaguar has not yet released performance numbers on the new super sports car and will wait until the world debut to unveil the information along with the car. Although its been spotted testing on the Nurgurgring, Jaguar released a teaser image to wet our appetites.

The new suprecar is the second model in the ultra-high performance R-S range and will likely share the same supercharged 5.0-liter V-8 with the XKR-S. The potent V8 produces 550 horsepower and 510 pound-feet of torque and is mated to a ZF eight-speed automatic delivering power to the rear wheels. 0-60 times could be in the high 4 second range with speeds topping 185 mph. Just 200 examples of the XFR-S will be offered in the U.S. making it one of the most exclusive Jaguar models ever. Look for the sports car to be available in early 2013.

The all-new 2013 Range Rover will be making its U.S. auto show debut in Los Angeles and is the world's first SUV with a lightweight all-aluminum body. The brand’s flagship model gets a total redesign and features a naturally-aspirated 5.0-liter V8. The new lightweight SUV will be approximately 837 pounds lighter than the outgoing model. Improvements have been made in performance, agility and fuel mileage. The new Range Rover goes on sale in December, 2012.

The all-new Jaguar F-TYPE is also making its U.S. auto show debut in Los Angeles and for the first time will be shown in Black Pack performance trim. The sports car is an all-new convertible with a front-engine, lightweight aluminum architecture with rear-wheel drive. The high-performance Jaguar F-TYPE sports car goes on sale in early summer, 2013.

Look for the 2013 aluminum Range Rover, sporty Jaguar F-TYPE Black Pack and the ultra-high-performance Jaguar XFR-S to be unveiled at the Los Angeles Auto Show which starts on November 28th. Jaguar Land Rover is counting on this show to jump start the three new vehicles sales here in the U.S.