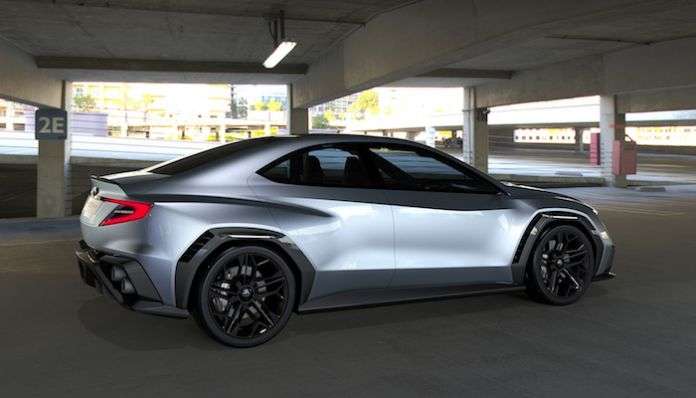 After the Subaru VIZIV Performance Concept was unveiled at the Tokyo Motor Show this week, fans want to know one thing. Where’s the hatch body style? The concept is a preview of the fifth-generation Subaru WRX and it’s a sleek sedan body, but where’s the hatch? While fans like the overall design of the performance machine unveiled in Japan, they still want a 5-door WRX/STI.

Subaru unveiled a preview of the next-generation WRX and WRX STI design language that’s likely to hit showrooms in 2019 as a 2020 model. Of course the final production model won’t look like the concept, but it gives performance enthusiasts a good idea of what the designers at Subaru Corporation have in mind for the future direction of the new performance model. Add a wing on the back and it gives fans an idea of the 2020 WRX STI.

We also know the performance models will be the next in the lineup to get the new Subaru Global Platform after the Forester and new Ascent 3-Row family hauler. The sedans are due for a complete remodel and fans are hoping for more changes like a new 5-Door hatch body style to return, and a new FA20 2.0-liter DIT powerplant under the hood. Neither has been confirmed by Subaru.

Subaru will infuse the fifth-generation WRX/STI with all of its core values which includes, Symmetrical all-wheel-drive, rally-bred driving performance, a Boxer engine, and improved safety technology. As reported in USA Today, Americans want hatchbacks more than sedans. And, the new-generation STI needs a hatch body style to compete with the new Honda Civic Type R, and Volkswagen Golf R hot hatches.

Look for the 2020 Subaru WRX STI to get a more powerful turbo boxer engine, (possibly a FA20 2.0-liter DIT), it will get a more rigid Subaru Global Platform architecture, have an even lower center of gravity, and it will be lighter with the use of carbon fiber parts in the bumpers, fenders, and roof, and it will get improved driving dynamics. What we don’t know is whether the fifth-generation models will get a 5-Door hatch body style with greater cargo-carrying ability and versatility.

SubaStar wrote on October 29, 2017 - 2:33pm Permalink
This concept remains... a concept. Technically, on the next coming production model, it will be easy to include the rear window built-in with the trunk, as Honda has done with its Civic Type R. And then you have a sedan looking model, with the practicability of a hatchback. Don't you think it possible? I do!
Denis Flierl wrote on November 1, 2017 - 7:32am Permalink
Hey SubaStar, yes they could make it work. Just like the new-gen Impreza! We can only hope.
JP wrote on October 30, 2017 - 5:05pm Permalink
Dennis, Have you heard anything indicating that if an FA20 is used it'll be a 2.0? Why not a 2.5? I know that's only 0.125 additional liters per cylinder, but more is more, no? Then again the Mercedes GLA is getting 355hp out of it's 2liter 4cyl. turbo engine, so why can't we? We're already getting jipped on the interior and other non-performance aspects of the car to "cover" the cost of the performance of the engine and drivetrain in order to keep the car's MSRP where it is, mine as well keep it up and give us 350+ ponies. Please and thank you.
Denis Flierl wrote on November 1, 2017 - 7:36am Permalink
JP, I don't have any info indicating the next-generation will get the FA20. Subaru would have no problem bumping up hp in the 2.0-liter boxer, so that's not an issue. Thanks for reading!
mike wrote on August 12, 2018 - 1:42pm Permalink
Please get rid of the CVT.also built the impreza with 1.6turbo engine same as the yellow concept.