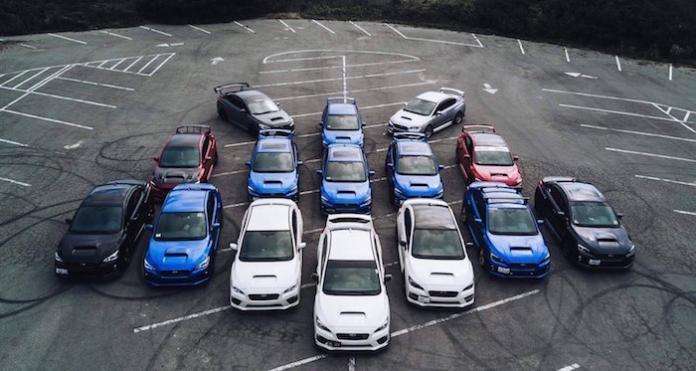 The 2018 Subaru WRX/STI is in a sales slide. A return to a hatch body would bring it back fast!
Advertisement

Ok, we can’t figure out why Subaru isn’t listening to their loyal customers and they’re not paying attention to what’s going on in the compact performance car market. Fans want a hatchback WRX/STI performance car and Subaru won’t give it to them. The truth is in the sales this summer. It can officially be called a major trend, the WRX/STI sales are in the dumps. The WRX and WRX STI performance sedans have slid backward in sales for the fourth straight month.

What would turn it around? We think a return to the hatch body style would bring the compact performance car back to life quickly. The number’s don’t lie. Even thought the 2018 WRX/STI gets a significant remodel, sales of the newly-revamped WRX and WRX STI performance sedan have slipped again. Subaru of America reports 2,510 units were sold in September, a 6.5 percent drop over the same month last year.

It’s been a summer of going backwards for the sport-tuned WRX and performance-tuned WRX STI sedans. They saw their biggest drop last month, down 20.9 percent for the month of August. Sales of the WRX/STI were also down 10.8 percent in July and slipped 15.2 percent in June.

It’s now been one third of the year of sales drops and can now be considered a major trend, at least in the US. In Canada, Subaru’s performance sedans, the WRX and WRX STI, enjoyed a record-breaking month with 431 units sold, an increase of 18.1 percent.

Bring back the hatch, Americans want it

Bringing back the WRX/STI hatchback would turn things around in a hurry in the US. Subaru fans have been asking for the return of the 5-Door body style since it was dropped in 2015MY. The new-generation STI needs a hatch body style to compete with the new Honda Civic Type R, and Volkswagen Golf R models.

It’s a fact that Americans want hatchbacks more than sedans. In 2017, compact and subcompact car sales are down 25 percent in the US. While hatchbacks in those same classes have risen 16 percent. Ford has it figured out. While hatchbacks account for about a quarter of industry small car sales, Ford’s Fiesta and Focus outperform that significantly at 33 percent and 40 percent respectively. Ford sales analyst Erich Merkle told USA TODAY, “Hatchbacks are the nugget of hope for the small car segment.”

We are stumped why Subaru isn’t listening to their fan base, and not paying attention to current trends in the compact performance car market. Subaru has been quiet about their plans for the 2020MY WRX/STI when it’s due for a complete revamp. STI fans want a hatch and it would turn things around in a hurry.

Elon Makes a Cybertruck Statement With an Action, But Quiet in Words
Tesla's Record Month in China: Doubled Registrations in March 2021
END_OF_DOCUMENT_TOKEN_TO_BE_REPLACED