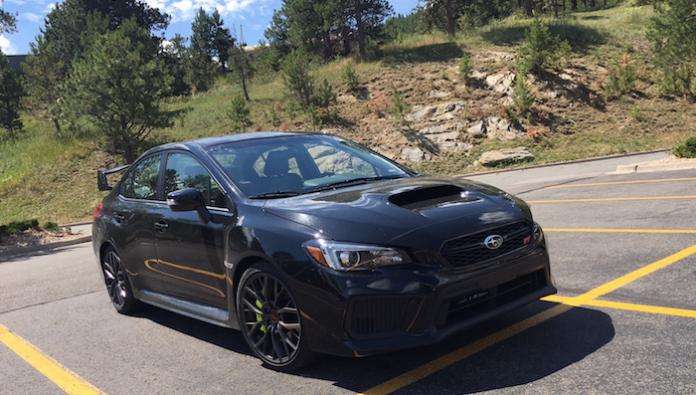 Review: 2018 Subaru WRX STI It’ll Snarl and Growl But It Won’t Ravage You

This week we drive the 2018 Subaru WRX STI. It’ll snarl and growl but it won’t ravage you. STI gets a surprising new ride that will appeal to a larger audience.
Advertisement

The newly-refreshed 2018 Subaru WRX gets a number of performance upgrades, but it also gets more comfort than any previous-generation STI performance car. It’s going to appeal to a wider audience because it won’t ravage you when you use it as a daily driver. The WRX STI is still a performance enthusiast’s sedan, but it will also appeal to your softer side.

For 2018, the Subaru WRX STI gets a refresh of its suspension, interior and safety system. The new STI gets revised suspension tuning, new Brembo brakes with larger cross-drilled rotors, new 19-inch wheels, Recaro performance seats with power driver’s seat, and LED Steering Responsive Headlights. It also gets revised front styling, the suspension has been optimized for better handling and ride comfort, and the interior gets upgraded with new materials and a quieter cabin. A revised front structure improves frontal collision performance.

Options on this WRX STI tester were the Recaro sport seats, with eight-way power-adjustable driver seat and keyless ignition and entry. ($2,500). Total MSRP as tested including destination: $39,455. 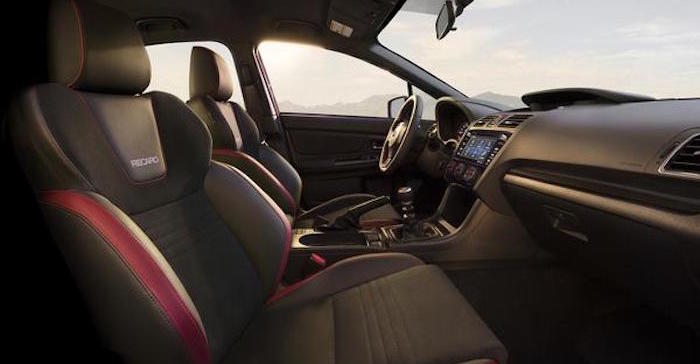 Subaru interiors have been their worst attribute, and the WRX STI needed improvements. The biggest upgrade on the 2018 WRX STI might be the cabin. Our tester came with the optional Recaro sport seats and they are worth the money. With the 8-way power on the driver’s seat, it’s now easy to find the perfect driving position for either highway cruising or for spirited driving on the street or track. And the new performance seats will keep you planted when you push it hard in the curves. The black and red Ultrasuede leather is soft and it’s the best material to date in the STI. There’s more soft-touch materials in this newly-refreshed interior and there’s redesigned interior door grips, a new rear seat armrest with cup holders, and faster remote trunk opening.

There’s still some wind and tire noise seeping through, but the cabin is quieter than the outgoing model. It now features thicker door glass, revised door sealing and a foam-filled windshield header beam contributing to unwanted noise being kept out. It’s always been interesting when automakers try to keep the exterior sounds out, when tuners will bolt on a custom exhaust system on this performance car for better exhaust note performance. Subaru is definitely trying to appeal to wider audience with the new STI.

There’s also a new, larger high-def multi-function display (5.9-inch vs. 4.3-inch before) making it easier to see vehicle functions when you are on the go. WRX STI comes standard with STARLINK 7.0” multimedia audio unit which is upgraded from the previous STARLINK 6.2” unit, but we weren’t impressed with the sound quality of the sound system.

The 2018 Subaru WRX STI stays with the 2.5-liter turbo boxer engine producing 305 horsepower and 290 lb. ft of torque. No changes were made to the power plant for 2018. The EJ25 boxer is highly modifiable and many owners will add upgrades to boost horsepower and performance. But even without mods like a new exhaust system, engine management timing, fuel system, intake, intercooler and turbo upgrades, the STI will satisfy the average performance fans.

The WRX STI is only available with one transmission, a six-speed manual gearbox sending power to all four wheels by way of Subaru’s excellent rally-bred Symmetrical all-wheel-drive system. You won’t need to leave this performance car in the garage during inclement weather. The STI gets an EPA estimated 17/23 city/highway mpg and 19 combined mpg using premium unleaded fuel.

The yellow-painted brake calipers peaking through the new Y-shaped spoked 19-inch alloy wheels gave us an idea of how the new Brembo brakes would upgrade the ride. Performance enthusiasts won’t need to do anything to the suspension and brakes. It gets larger brake pads, stronger mono-block 6-piston calipers in front, monoblock 2-piston calipers in the rear and larger, drilled rotors on all four corners for better heat dissipation. Go to Page 2.

The larger diameter 245/35R19 grippy summer performance tires stuck to the pavement as we pushed the STI hard up a twisty mountain road west of Denver near Evergreen. It’s the perfect road short of being on a track to test the new 2018 WRX STI. We noticed improved cornering performance with its revised suspension tuning over last year’s model. We took tight mountain corners at double the posted speed and we couldn’t get the STI to slide on one tight s-curve. The new Brembo brakes worked as advertised and improved stopping performance significantly over the previous STI.

Here’s where Subaru improved the new 2018 STI the most. We think the revised suspension not only improved cornering performance, but it felt smoother on the open road. The suspension is still firm, but it won’t leave you tired after a long road trip. It definitely provides more ride comfort than any previous WRX STI. We aren’t sure if its the larger tires or the steering, but the new STI’s steering also felt sharper as it only takes minimal movement of the steering wheel to move the sedan off its track at high speeds.

We checked out the revised Driver Controlled Center Differential (DCCD) AWD system this week and we noticed the quicker response time. Subaru says the system now uses electronic control over the outgoing model which used a combination of mechanical and electronic center limited slip differential control. We dialed in the center differential locking of the WRX STI for the driving conditions, and we were able to essentially adjust the handling. It’s also smoother than the 2017 model.

At night, visibility has been improved, especially in the dark mountain corners where there’s no street lights. The 2018 STI’s redesigned LED Steering Responsive Headlights helped illuminate the curves at night which is especially helpful if you live in a rural area where dear can jump out in front of you. Another new feature adventure enthusiasts will like are the new roof mounting brackets that can be used for a rack for your mountain bikes, kayak, snowboards or cargo carrier.

The 2018 Subaru WRX STI gets a refresh that will broaden its appeal to a wider audience than ever before. The ride has been improved and it won’t rattle your teeth on uneven pavement, and the STI won’t disappoint die-hard performance fans with its improved suspension and stopping power. The cabin gets much-needed upgrades in material and we would choose the new Recaro sport seats over the standard ones. The newly-refreshed 2018 Subaru WRX STI gets improvements over the outgoing model and the new model will snarl and growl but it won’t ravage you.

John casey wrote on July 26, 2017 - 9:51pm Permalink
I want one.
Denis Flierl wrote on July 27, 2017 - 11:22am Permalink
It's a sweet ride John. Thanks for reading!
SubaStar wrote on July 29, 2017 - 6:57am Permalink
For me, European, Subaru-lover-driver from early 90', the actual WRX STI became too fat, too luxury, too heavy when keeping a much dated power plant. For sure, I love my 2013 Hatchback but none of those sedan models from that year gave me any envy to trade mine. May be the one announced for 2019/2020, on the new SGP (Subaru Global Platform), with a new DIT (Direct Injection Turbo) mill of 2.0 liter or less, hopefully with a hatchback widebody will catch my attention. Ok, I'll be patient until that time but PLEASE SUBARU, don't get outdated in front of a competition which evolves quicker and stronger than you do...
Denis Flierl wrote on July 29, 2017 - 9:31am Permalink
Hey SubaStar, hopefully Subaru brings back the hatch and updates the new-gen STI with a 2.0L DIT boxer! Thanks for reading.
SubaStar wrote on July 29, 2017 - 9:46am Permalink
As you write Denis! As French is my native language, I hope my written English/American in understandable by you and your readers... Feel free to correct any mistakes/grammar you would note before publishing!
Denis Flierl wrote on July 30, 2017 - 6:46am Permalink
My name has the French spelling too! Your English is good, no problems Suba Star!
SubaStar wrote on July 30, 2017 - 10:09am Permalink
Yes, Denis is the French spelling, Dennis is the English/American way. So if my English is sufficient, I'll keep posting here. Your articles are very close with the Subaru's actuality, we don't have such a regular/fresh information here in France. Sadly, Subaru is not a popular brand here due to strict regulations on emissions, but it has a excellent reputation though.
Denis Flierl wrote on July 31, 2017 - 6:11pm Permalink
Too bad you don't have many Subarus in France. Your English is very good and we want you to keep posting comments SubaStar!